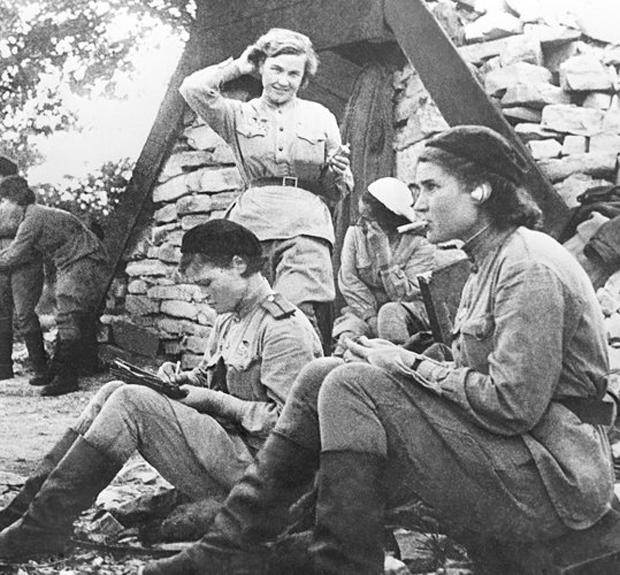 While the story of the Women's Air Service Pilots (WASPs) in the United States is relatively well known, much less well known is the story of the Russian 588th Night Bomber Regiment. Made up of only women, the regiment, unofficially known as “Stalin’s Falcons,” were given a much more chilling moniker by the Germans: Nachthexen, or “The Night Witches.”

The year was 1941 and Hitler had invaded the Soviet Union. By November the German army was just 19 miles from Moscow. Leningrad was under siege and 3 million Russians had been taken prisoner. The Soviet air force was grounded.

In the summer of 1941 Marina Raskova, a record breaking aviatrix was called upon to organise a regiment of women pilots to fly night combat missions of harassment bombing. From mechanics to navigators, pilots and officers, the 588th regiment was composed entirely of women. The 588th was so successful and deadly that the Germans came to fear them and Luftwaffe pilots were promised an Iron Cross for shooting down a Night Witch!. The women, most of them barely 20 years old, started training in Engels, a small town north of Stalingrad. The 588th flew its first bombing mission on June 8, 1942. It consisted of three planes; their target was the headquarters of a German division. The raid was successful but one plane was lost.

The 588th flew thousands of combat bombing missions. They fought non-stop for months, sometimes flying 15 to 18 missions on the same night. They flew obsolete Polikarpov Po-2 wooden bi planes that were otherwise used as trainers. They could only carry two bombs that weighed less than a ton altogether. Most of the women who survived the war had, by the end, flown almost a thousand missions each. 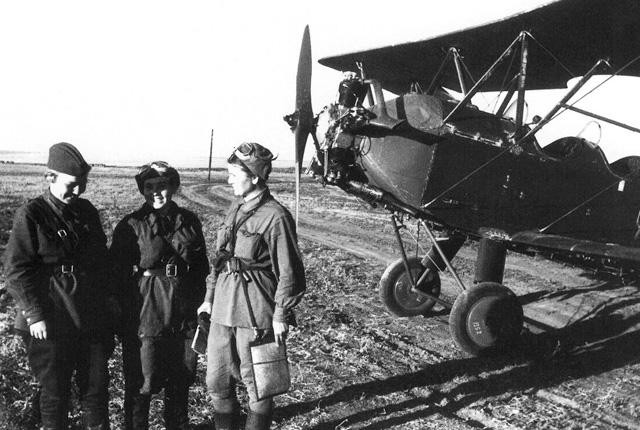 Nadya Popova recalls those missions and comments that it was a miracle the Witches didn't suffer more losses. Their planes were the slowest ones in the air force and often came back riddled with bullets, but they kept flying. In August of 1942 Nadya and her navigator crashed in the Caucasus. They were found alive a few days later.

Years after the war, Nadya commented that she used to sometimes look up into the dark night sky, remembering when she was a young girl crouched at the controls of her bomber, and she would say to herself, "Nadya, how did you do it?"

There was a great deal of resistance to the idea of women combat pilots from their male counterparts. The women had to fight both enemy aircraft as well as the resentment of their male colleagues. In spite of the never-ending fatigue , the loss of friends, and sexual harassment from their suspicious male counterparts, the women kept on flying. Eventually the Soviets formed three regiments of women combat pilots -- the 586th, the 587th and the 588th.

The 586th also trained at Engels, first in the two-seat Yak-7 trainers and later on in the Yak-1 fighters. The women proved themselves to be as good as the men. The most outstanding pilots were Raisa Belyaeva and Valeria Khomyakova. The later was allowed to fly solo in the Yak-1 after just 52 minutes of dual instruction. She earned the grade of "excellent" during one trial flight but on a subsequent flight crash-landed on the frozen Volga River when she switched to an empty fuel tank. All of the women had their hands full, learning so much information in such a short amount of time. 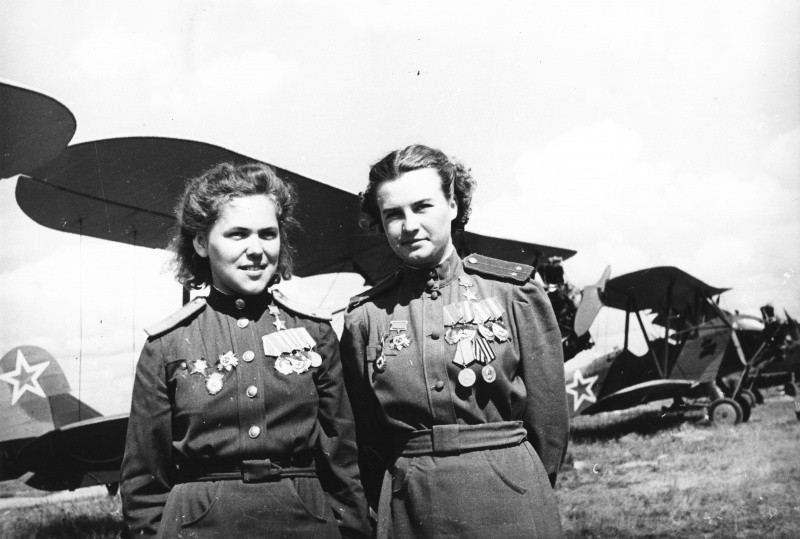 The female mechanics also had their hands full with the demanding task of keeping the planes flying. The winter of 1942 was brutally cold, with temperatures plunging as low as -54F and countless snow storms. One night in March of that year the women were called upon to save the aircraft from being blown over by gale-force winds. Several women would literally lie on the wings and horizontal stabilisers of each plane, using the weight of their bodies to keep the planes from blowing away. When the wind subsided, the women looked like snowmen, but the planes were intact. Their respite was brief however. By noon the storm had resumed, and again the women rushed to the airfield to save the planes. The storm finally blew itself out around midnight, and the exhausted women, soaked to the skin and half frozen, could finally rest.

The Night Witches practiced what is known as harassment bombing. Their targets were encampments, supply depots, rear base areas, etc. Their constant raids made rest for the troops difficult and left them feeling very insecure.

The top speed of the Po-2 biplane was 94 mph ((82 knots). This is slower than even most World War I fighters and left them very vulnerable to enemy night fighters. But the Night Witches learned their craft well. The Po-2 was very slow, but it was also extremely maneuverable. When a German Me-109 tried to intercept it, the Night Witches would throw their Po-2 biplanes into a tight turn at an airspeed that was below the stalling speed of the Me-109. This forced the German pilot to make a wider circle and come back for another try, only to be met by the same tactic, time after time. Many of the Witches flew so low to the ground that they were hidden by hedgerows! Completely frustrated, the German pilots would finally simply give up and leave the Po-2 biplanes alone.

The stall speed of an Me-109 E,F and G models was about 120 mph ((104 knots). This made the top speed of the Po-2 biplanes slower than the stalling speed of the German fighters. The Focke-Wulf, also used in the Eastern front, had a high stalling speed as well, so it suffered the same fate. 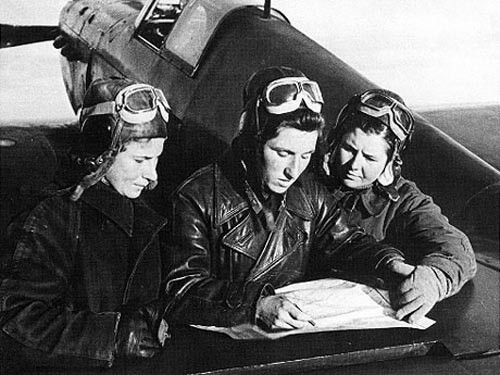 The Witches developed the technique of flying close to their intended targets, then cutting their engines. Silently they would glide to their targets and release their bombs. Then they would restart their engines and fly away. The first warning the Germans had of an impending raid was the sound of the wind whistling against the wing bracing wires of the Po-2s, and by then it was too late.

The Po-2 would often pass undetected by the radar of the German fighters due to the unreflective nature of the canvas surfaces and also because they flew so low to the ground. Planes equipped with infrared heat seekers fared no better at detecting them due to the small heat emission from their puny little 110-hp engines.

Searchlights, however presented a big problem. The Germans at Stalingrad developed what the Russians called a "flak circus". They would arrange flak guns and searchlights (hidden during the day) in concentric circles around probable targets. Planes flying in pairs in a straight-line flight path across the perimeter were often ripped to shreds by the flak guns. So the Night Witches of the 588th developed their own technique to deal with the problem. They flew in groups of three. Two would go in and deliberately attract the attention of the Germans. When all the searchlights were pointed at them, the two pilots would suddenly separate, flying in opposite directions and maneuvering wildly to shake off the searchlight operators who were trying to follow them. In the meantime the third pilot would fly in through the dark path cleared by her two teammates and hit the target virtually unopposed. She would then get out, rejoin the other two, and they would switch places until all three had delivered their payloads. As Nadya Popova noted, it took nerves of steel to be a decoy and willingly attract enemy fire, but it worked very well.

After the war, a number of the women continued to fly, some as test pilots. Others retired to a quiet life or returned to work, either in factories or on farms. In spite of the danger and their heavy losses, most of the women later described their combat experience as the most exciting time of their lives. They endured loss of family and homes in their absence, met and lost lovers and husbands, and were often wounded or killed in action.

A fitting tribute was made to the dedication of this unit's airwomen by the male Free French pilots of the Normandie-Niemen Fighter Regiment who often fought alongside the Night Witches:

Even if it were possible to gather and place at your feet all the flowers on earth, this would not constitute sufficient tribute to your valour.