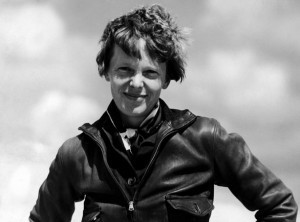 In 1923, Earhart, fondly known as "Lady Lindy," became the 16th woman to be issued a pilot's license. Taking her first flying lesson on January 3, 1921, in six months she had managed to save enough money to buy her first plane. The second-hand Kinner Airster was a two-seater biplane painted bright yellow—Earhart named her newest obsession "The Canary" and used it to set her first women's record by rising to an altitude of 14,000 feet. Her strong will and conviction enabled her to overcome the challenging technical problems, gender bias and financial obstacles of the day.

Her many accomplishments in aviation went on to inspire a generation of female aviators, including more than 1,000 women pilots of the USAAF Women Airforce Service Pilots (WASPs) who ferried military aircraft, towed gliders, flew target practice aircraft, and served as transport pilots during World War II. 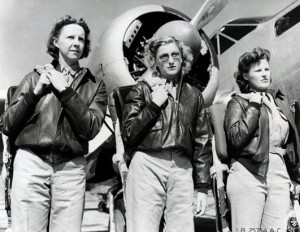 Earhart was a widely known international celebrity during her lifetime. Her shyly charismatic appeal, sartorial style, independence, persistence, coolness under pressure, courage and goal-oriented career along with the circumstances of her disappearance at a young age have afforded her lasting fame in popular culture. 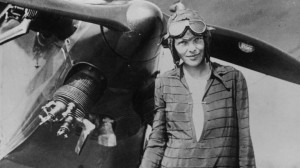 Amelia’s sense of style reflected her independent personality, she was at odds with the feminine fashion trends of the day and instead was seen and pictured in newspapers wearing mens aviation clothing including military issue chinos trousers and leather flight jackets, revolutionary for the time. In 1932, Amelia developed flying clothes for the Ninety-Nines. Her first creation was a flying suit with loose trousers, a zipper top and big pockets. Vogue advertised it with a two-page photo spread. Then, she began designing her own line of clothes "for the woman who lives actively." It didn’t take long for masculine tailoring to become de rigueur for the Fashion Houses and style conscious females of the 1930’s. 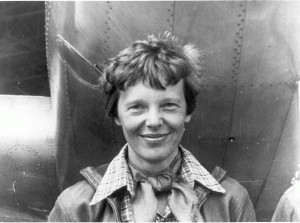 In 1937, as Earhart neared her 40th birthday, she was ready for a monumental, and final, challenge: she wanted to be the first woman to fly around the world. Despite a botched attempt in March that severely damaged her plane, a determined Earhart had the twin engine Lockheed Electra rebuilt. "I have a feeling that there is just about one more good flight left in my system, and I hope this trip is it," she said. On June 1st, Earhart and her navigator Fred Noonan departed from Miami and began the 29,000-mile journey. By June 29th, when they landed in Lae, New Guinea, all but 7,000 miles had been completed. Frequently inaccurate maps had made navigation difficult for Noonan, and their next hop—to Howland Island—was by far the most challenging. Located 2,556 miles from Lae in the mid-Pacific, Howland Island is a mile and a half long and a half-mile wide. Every unessential item was removed from the plane to make room for additional fuel, which gave Earhart approximately 274 extra miles. The U.S. Coast Guard cutter ITASCA, their radio contact, was stationed just offshore of Howland Island. Two other U.S. ships, ordered to burn every light on board, were positioned along the flight route as markers. "Howland is such a small spot in the Pacific that every aid to locating it must be available," Earhart emphasised.

On July 2nd, At 10 am local time, zero Greenwich time, the pair took off. Despite ideal weather reports, they flew into overcast skies and intermittent rain showers. This made Noonan's favored method of tracking, celestial navigation, difficult. As dawn neared, Earhart called the ITASCA, reporting "cloudy weather, cloudy." In later transmissions, Earhart asked the ITASCA to take bearings on her. The ITASCA sent her a steady stream of transmissions but she could not hear them. Her radio transmissions, irregular through most of the flight, were faint or interrupted with static. At 7:42 am, the ITASCA picked up the message, "We must be on you, but we cannot see you. Fuel is running low. Been unable to reach you by radio. We are flying at 1,000 feet." The ship tried to reply, but the plane seemed not to hear. At 8:45, Earhart reported, "We are running north and south." Nothing further was heard from her. 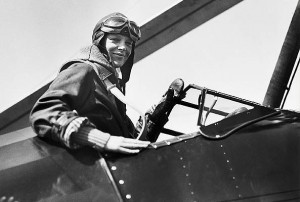 A rescue attempt immediately commenced and became the most extensive air and sea search in naval history. On July 19th, after spending $4 million and scouring 250,000 square miles of ocean, the United States government reluctantly called off the operation. In 1938, a lighthouse was constructed on Howland Island in her memory, and across the United States, streets, schools, and airports are named after Earhart. Her birthplace, Atchison, Kansas, became a virtual shrine to her memory. Amelia Earhart awards and scholarships are given out every year. 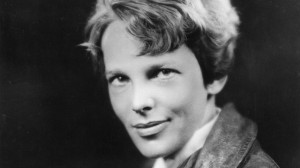 Despite many theories, no proof of Earhart’s fate exists. There is no doubt, however, that the world will always remember Amelia Earhart for her courage, vision, and groundbreaking achievements, both in aviation and for women.