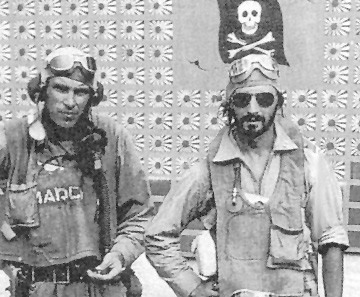 The Jolly Rogers were initiated during World War II as US Navy Fighter Squadron 17 (VF-17) on January 1, 1943 under the command of LCDR Tom Blackburn. The squadron was one of the first Navy squadrons to fly the Vought F4U Corsair fighter. Formally in charge of training new navy fighter pilots in Florida, Blackburn quickly got his new squadron up to speed and they soon deployed into combat aboard the aircraft carrier Bunker Hill (CV-17).

Prior to their deployment in the Pacific the Navy suddenly changed plans and decided to replace all Corsair squadrons on aircraft carriers with the Grumman F6F Hellcat fighter. The reason for this move was that many commanders had submitted negative reviews of the Corsair's carrier suitability, as it was a difficult plane to master, especially compared to the easy-to-fly Hellcat. Time would correct this initial change and later during WW2 Corsair Squadrons would again be deployed as Carrier Aircraft and this continued in later years to the Korean Conflict. 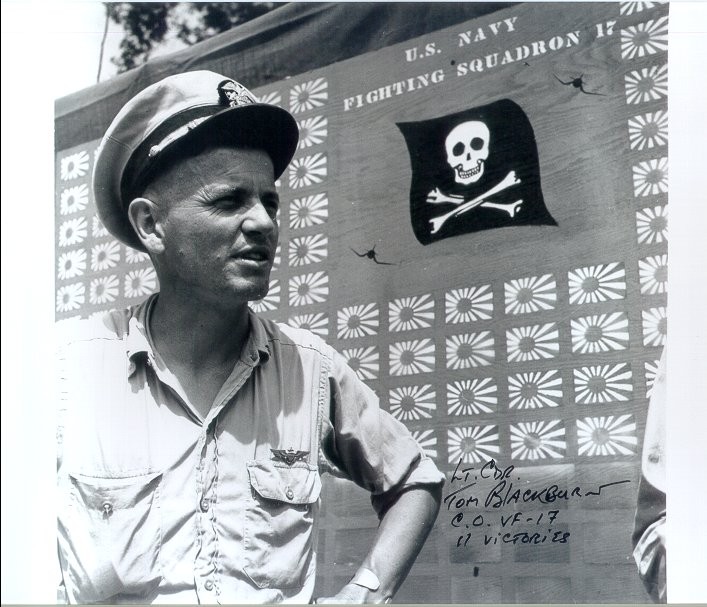 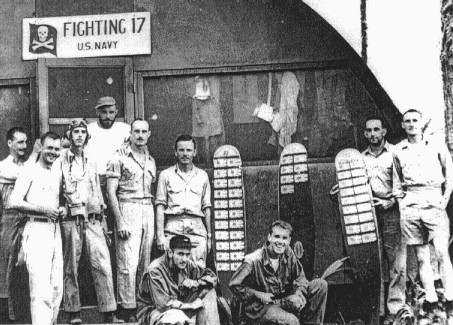 So before VF17 had a chance to fire a shot, they were off-loaded from Bunker Hill and reassigned to land bases on the Solomon Islands in the Pacific. Because their plane was called the "Corsair", VF-17's men wanted a squadron name that would correspond with that pirate theme which would reflect the proper 'attitude'. Soon thereafter, a black flag with white skull-and-crossbones (the "Jolly Roger") was painted on either side of the F4Us engine cowlings, and the squadron's nickname was born.

"Whispering Death" was what the Japanese called the F4U Corsair during World War II. Appropriately so, as the last thing many Japanese pilots saw was a Corsair in their 6 o'clock position. More appropriate was the Skull and Crossbones, or Jolly Roger, painted on the noses of one particular group of Corsairs - those of Navy Squadron VF-17. This symbol flew from the masts of pirate ships who once sailed the seas looking for treasure to plunder. To cross paths with pirates meant death for those who chose to fight with them. From October 1943 to March 1944 many unfortunate Japanese pilots crossed paths with the Jolly Rogers and were dispatched in short order. 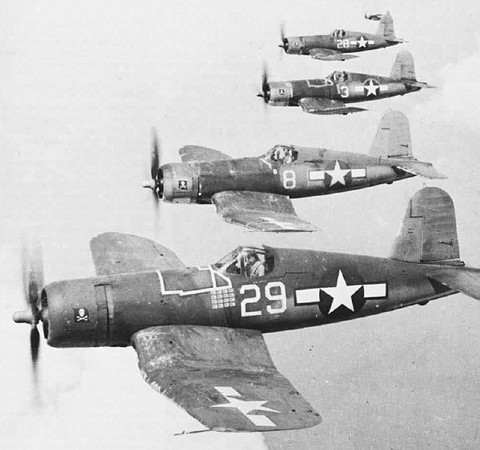 The Japanese stronghold on Rabaul, on the northeast corner of New Britain, remained a major thorn in the side of South Pacific Allied operations. In order to neutralise this threat, Task Group 50.3 (including the carriers Essex,Independence and Bunker Hill) launched a major strike on the morning of 1 November 1943.

While the carrier-based planes struck Rabaul, several land-based squadrons were assigned to CAP the task group. Fighting-17 joined VMF-212, VMF-221, the Hellcat-flying VF-33, and a squadron of New Zealand P-40s in this mission. The Jolly Rogers were to take off at 0400, CAP from dawn to 0900, refuel and (if needed) rearm on the carriers, and continue the CAP at 1030 until fuel/ammo/damage demanded they return to Ondongo.

After an hour of early-morning CAP, Blackburn destroyed a lone incoming Japanese Kawasaki Ki-61 which was detected by shipboard radar. There was no further action by 0900, when VF-17 and -33 landed to refuel. Blackburn noted that these landings proved to any skeptics that the Corsair was indeed carrier-worthy.

Morning faded into early afternoon, and the weather conditions over the task force began to degenerate. Puffy clouds developed into massive cumulous clouds; visibility shrank. At 1300, radar detected a large inbound Japanese strike, and the CAP was scrambled to intercept. A few minutes out from the carriers, the pilots of VF-17 sighted 65 Zekes escorting 25 Val dive bombers and 15 Nakajima B5N Kate torpedo bombers. They dove onto the Zekes with a considerable altitude advantage and all of the Jolly Rogers bagged at least one kill or more.

The remainder of the Nakajima B5N's  emerged from the protective clouds and initiated a torpedo run on the Bunker Hill. They were quickly bounced. As the planes closed on the carrier, 40mm and 20mm AA erupted around them and sent huge plumes of water before and between the planes. Fighting 17 engaged them again, this time destroying what was left of the Japanese attack.

For the day's action in what came to be called The Battle of the Solomon Sea, VF-17 was credited with 18.5 confirmed kills and 7 damaged Japanese planes. Two pilots, Baker and Hill, were forced to ditch their planes on-route to Ondongo; both were successfully rescued. The battle was a major strategic victory for the Allies, as the Japanese gave up all attempts to repel the invasion of Bougainville afterwards. Instead, they attempted whatever holding action they could in the Solomons while withdrawling their forces to the strongholds of Truk and Rabaul. 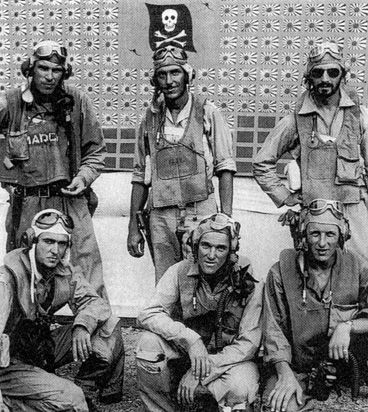 Tom Blackburn wanted fearless, aggressive pilots in the squadron. He didn't always discourage the raucous behavior of his pilots, as some in the Navy thought he should, but he ended up with the type of team he needed. Aggressiveness was an essential in all successful fighter units of the war.

Under his command, VF-17 became the highest scoring Navy Corsair squadron of WWII. They destroyed 154 Japanese planes in 76 days, beating the record of 'Pappy' Boyington's notorious Black Sheep VMF 214, a US Marine Squadron.

Although they were only there for a very short span of time, Navy Squadron VF-17 played an important role in shaping the course of WWII and the defeat of the Japanese in the Pacific. The "Jolly Rogers" is continued to this day in the US Navy with VF-84 and VFA-103.