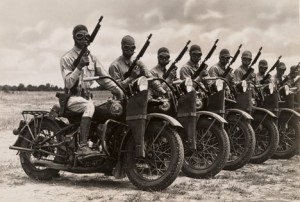 As is the premise for ELMC, all US motorcycle clubs, whether of the law-abiding or outlaw biker gang variety, were descended from WWII vets who caught the "riding" bug in the combat zone. But what role, exactly, did motorcycles play in the military?

Next to a jeep or tank, a two-wheeled vehicle that leaves its operator exposed seems a poor choice for an army vehicle; but there are worthwhile tradeoffs. A motorcycle's speed makes it ideal for scouting, reconnaissance and messenger capacities. It can travel where larger vehicles cannot. It uses less fuel, and you can fit several of them into a transport vehicle. Adverse weather and terrains could reduce their effectiveness, but clever engineers would counter that with design. 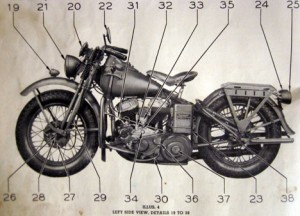 The Harley-Davidson WLA, which first saw production in 1940 was the US Army motorcycle of choice. Harley engineers took an existing civilian bike, the WL, and adapted it for military use with several changes. The fenders were shaped in such a way that mud flung by the wheel could exit from the sides rather than clog. It was fitted with a heavy duty carrying rack in the rear that could support an ammunition box or two radios, and saddlebags could be hung from its sides. A scabbard placed up front was sized large enough for the driver to tuck a Thompson submachine gun in. On the other side of the front wheel, another ammo box could be attached. A secondary set of "blackout lights" were added, which diffused the light to reduce the bike's nighttime visibility to observers. 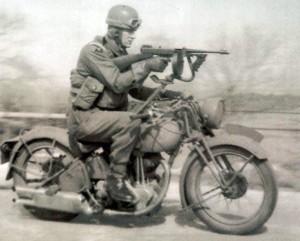 There were mechanical changes as well. In a nod to the Army's logistical needs, the air filter was replaced with an oil-bath air cleaner - something then used in farm tractors in high-dust environments - for ease of maintenance; rather than having to stock replacement air filters, the rider could "freshen up" his filter by adding regular motor oil. And the crankcase was redesigned to reduce water intake, so that the vehicle could reportedly ford 16 inches of water without stalling out. 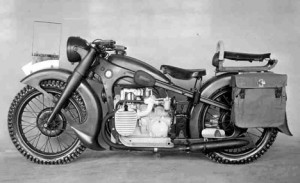 Harley had been building motorcycles since 1906. BMW got a much later start, around 1921; but by the time World War II rolled around, BMW's design & engineering was already world-class. In the 1930s BMW had mastered the emerging production method of electric arc welding, and were able to create incredibly strong joints. This practice was borne of necessity; sidecars were popular in Germany, perhaps more popular than in the US, where Americans aspired to ride around in automobiles. Sidecars placed a lot of stress on a motorcycle frame. But in thrifty Germany, with one passenger in the sidecar and another behind the driver, a sidecar-equipped motorcycle was an economical way to transport three people. BMW made their frames strong enough to handle that load. 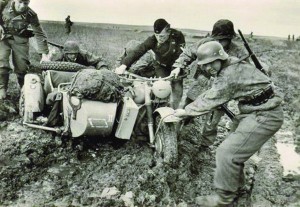 Sometime around 1941, BMW began producing an improved motorcycle at the German army's request. Their resultant R75 had a permanently-attached sidecar whose wheel was connected, via axle, to the motorcycle's rear wheel. The R75 thus effectively had two-wheel drive, which greatly improved the motorcycle's handling in adverse conditions. To simplify inventory and maintenance, all three wheels were designed to be interchangeable, and a spare was attached to the rear of each sidecar. Loaded up with two Jerrycans on the sidecar, one on the bike's rear, an extra seat behind the driver and a machine gun, the R75 made for a formidable and utilitarian vehicle capable of carrying three.

Both the R12 and the R75 - and indeed, any motorcycle made by BMW until 1994 - also incorporated another clever mechanical trick that Harley-Davidson had not been able to pull off: shaft drive. The rear wheel of the motorcycle was driven by a rotating shaft connected to a universal joint. In contrast, Harley's SLA, like most other motorcycles of the era, was chain-driven. As both the U.S. and Germany military would discover in the North African campaign, BMW's enclosed shaft was superior, in sandy conditions, to an exposed chain that grit could get inside of. 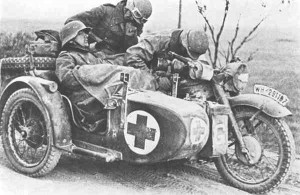 In the 1930s and '40s, to an American engineer, shaft-drive and telescoping forks were something like the concept of laser pistols today; we can envision how they should work in theory, but we can't yet figure out how to make them. BMW had worked it out, and their advanced design and engineering was therefore providing the German military with a material advantage.

However, as with the Jerry Can, at some point Allied troops captured a German R12 or R75 and sent it back home to be studied. Once the U.S. engineers had ripped the bike apart, converted the metric to Standard and reverse-engineered the manufacturing technology, Harley-Davidson was then tasked with producing a similar shaft-driven design. As it worked out, just over 1,000 XA models were produced - and they never got to see the North African sands for which they were designed. Military bureaucracy, combined with an increasing Army reliance on jeeps, meant that the relatively few XAs produced were wastefully relegated to base duty on U.S. soil. Today the XA is a collector's item and the motorcycles produced both in the US and Germany during WWII helped to push forward the boundaries of mechanical engineering in many respects affording us the machines we have today.