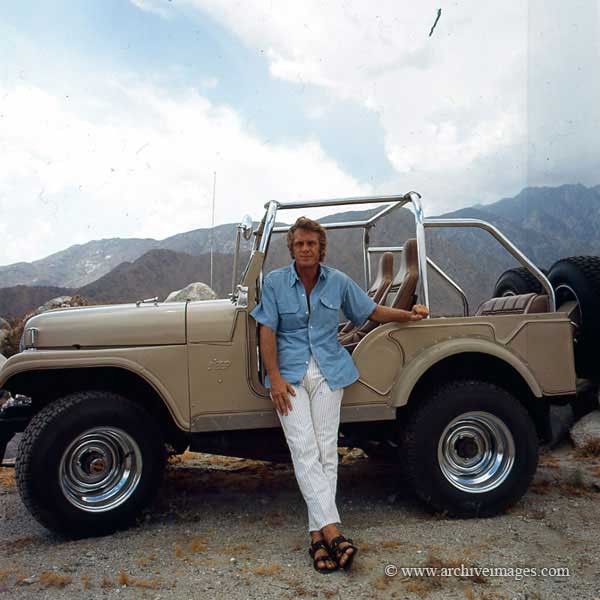 Steve McQueen was a well known motorcycle and car fanatic and a seasoned off-road racer. During some Baja races he was behind the wheel of a Super Jeep known as 'the Baja Boot', built by Vic Hickey of the now-defunct Con-Ferr Incorporated in Burbank, California. There was a feature on the Jeep and its assembly in the Sept. ’69 issue of Rod & Custom (where it was a finalist in the running as a ’69 Street Rod of the Year?!). They call it a Universal Jeep here, not a CJ5 but love it or hate it, this Jeep with chrome roll bar was cutting-edge back in 1969 for a street-driven 4x4, and probably used as a prerunner for desert races. This Jeep was rumored to been sold to Sonny Bono of Sonny and Cher fame and went to his house in Palm Springs. After Mr. Bono’s untimely death in 1998, the trail of ownership and current whereabouts of this classic seems to have gone cold.

Let’s not ponder the morality of stuffing the price of small house into a vehicle like a Jeep even though the result would put most muscle cars to shame on the road and do the same to nearly anything you care to name except a Baja Boot off the road. When you hire other folks, particularly specialists, to do your work for you and you want it done now and you crank in more running changes than a woman dealing with an architect, it’s going to cost, baby.

With a modicum of one’s own labor, the help of friends and neighbors, and a rational approach, almost anyone can come up with the equivalent of the example under discussion at less than half the cost. Either way you cut it, the result is desirable property.

Super Jeep came into being when a customer (who shall remain nameless) came to Con-Ferr Incorporated in Burbank, California, and told owner Pete Condos that he wanted the ultimate Jeep. It had to be fast, it had to be safe, it had to handle with the ease of a sports car, it had to look good, and above all else it had to be owner-proof. This last was the kicker; the customer is known for a weighty right foot and more guts than a packing plant. An additional request was that all parts be new, which, in the light of the construction techniques that followed, was hardly a necessity.

For openers, the customer purchased a basic V-6 Universal Jeep, the stripped variety that retails for around $3,000, and then said, “Go.” Condos trundled the thing over to his manufacturing plant, where it was dismantled totally to the bare frame. Plant foreman Chuck Atkinson took the latter item in charge and boxed every rail, including the crossmembers. Every juncture that was riveted he also arc welded, leaving the rivets in place for added security. At the rear, two fabricated plate spring perches were added outboard on each side and an extra shock mount was welded at each corner. A bracket to carry a Saginaw power steering unit was added to the left front. At each side on the rear a pair of three-leaf springs was installed, each carrying a pair of flat, unclipped overload or antibottoming leaves. Special fabricated boxed shackles held these at the rear. Springs at the front are standard but held with heavy plate shackles. Under these went the standard Jeep front axle equipped with Warn hubs.

Two spring units are used on each end of the rear axle. Three leaves are clipped, and two are used for overload. The ends of the dual springs are shackled to special boxes fabricated from plate.

At the rear is a Jeepster rear axle, used because it carries its third member in the center instead of being offset. The reason for this is that the entire powertrain was replaced by a high-performance 350 Chevy engine with a Turbo Hydramatic transmission. The long tailshaft extension and the Dana transfer case, which has its rear output shaft at the top, required that the rear axle carry a centrally located third member. Beginning to get the picture?

A bulletproof chassis needed to be coupled with the kind of total power that propels the Chevy Baja Boot. To further the hard-landing capability, vertical plates were welded across the tops of the axletubes to the third member cases to prevent axletube buckling. Double Koni shocks were mounted on all four corners. Wide-rimmed wheels with Inglewood Stagger Block tires completed the rolling gear.

Now came the trimming (and the running changes that we won’t detail here). Suffice it to say that the “take it off, put it back, take it off” routine sent the man-hour cost into an orbit that would confuse Houston Control. Con-Ferr’s wiring whiz, Dick Bowman, replaced all the stock conduits with quick-disconnect looms and an open fuse block so that if one circuit went out only that circuit would be affected and any part of the body could be removed without disrupting the whole system.

In its first, or competition, form, Super Jeep was equipped with a fiberglas sic hood and fender unit. Though light and strong, the owner decided that the steel stock pieces were what he wanted.

The body, which unbolts with ridiculous ease, had been sanded and repainted and given a whole gaggle of detail changes. The stock gas-fill port on the left was covered over. Hinges, clamps, and a glovebox door were chromed. A full set of Stewart Warner instruments was let into the dash. A central console was made up out of sheet stock to carry the Hurst shifter and special brackets and rails made from 1-inch-square tubing to carry the wiggy Solar Plastics bucket seats. These last, when properly upholstered, have to be the most comfortable, supportive seats ever to be put into an off-road vehicle. Running up from the Camaro Saginaw steering, the steering shaft terminates with a small foam padded wheel. This 13-inch item is all that’s necessary thanks to the power steering, and it imparts a sensitivity totally incongruous with the sheer beef of it all.

In place of the stock underseat fuel tank, two 15-gallon saddle tanks are stuffed up into the rear corners behind the wheels, and one big stainless steel 30-gallon tank rides under the body behind the rear axle. We don’t have any figures at hand, but it would seem reasonable to suspect that cruising range would be from 300 miles in rough country to 600 on the road—and you know there has to be a gas station somewhere in a radius that large.

Chuck Atkinson fits the 30-gallon main tank up into frame. Two other tanks ride in the rear body corners.

Due to the fact that the car was originally scheduled to be raced, not to mention for peace of mind, a full Con-Ferr rollcage was constructed. This is a stock item available from Con-Ferr and is, when mounted as intended, in accordance with the strict rules of the National Off Road Racing Association. Sharp-eyed, rules-conscious readers may spot something haywire about this particular installation, however. Chrome on a stress part, especially a roll bar, is looked upon with deep suspicion by tech inspectors and is subject to a thumbs-down unless accompanied by a certificate to the effect that it has been baked to alleviate any hydrogen embrittlement that may have occurred during the plating process. Not only is this cage chromed, but the man doing the plating cut it apart at the upper corners to get it into the plating tank and then put it back together with bolts and flanges with bolts placed in sheer! The customer accomplished this bit of instant turn-down all by himself over Condos’s kicking and squirming body. The result is great for kids to swing on but it would be laughed out of any responsible inspection lane on sight. Imitators be warned.

Originally a ’glass hood and fender assembly was installed for a significant reduction in weight, but an unfortunate prior experience with a hasty installation on another vehicle persuaded the customer to revert to the stock item. Not that the ’glass front end is a poor unit—it isn’t. It just needs proper holddowns due to its light weight.

The powerhouse: a 350 Hi Perf Chevy with upswept headers. The Hayden trans cooler keeps things cool in the Turbo Hydro.

As noted, underneath the hood lies a Hi Perf 350 Chevy V-8. Except for headers and a Carter AFB, iti s box-stock. The control words here are “Hi Perf”; this isn’t the little old lady’s 350 but a hulking, brutal torque producer that’ll pull stumps and still rev up a storm on demand. It sits in the hole as though it had been built just for that purpose. Up on the left side of the firewall is the Hayden trans-cooler, keeping the Turbo Hydro cool when the going gets rough. The header installation, thanks to the room available, has branches that sweep up and out, allowing welcome access to the plugs.

Looking back on the whole assembly operation, it was—except for the pressure and the cut-and-try necessary in such a total rebuild—remarkably simple once all the factors were known, very much reminiscent of building a roadster back in the days when good, fresh roadster bodies were available. The result, in terms of raw brutality, has to be the greatest virility symbol since the Cadillac-Allard. 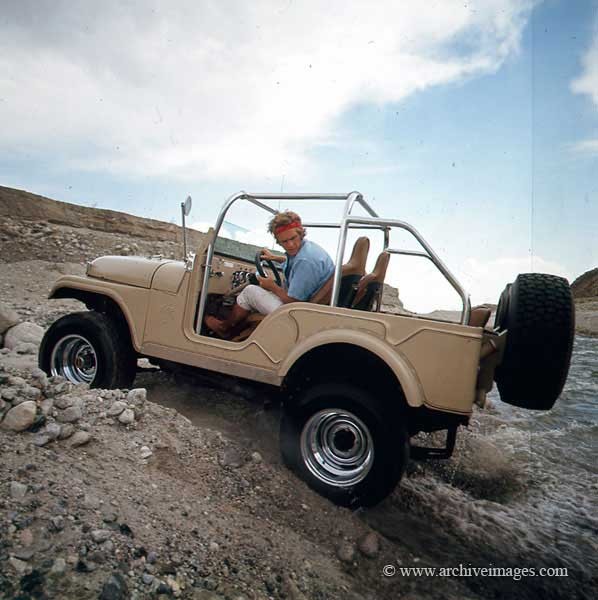