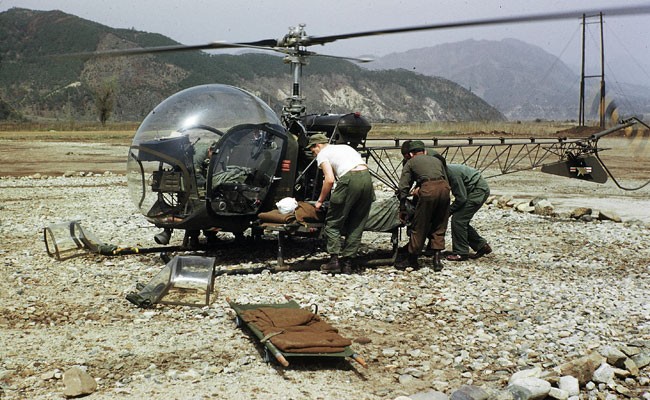 While United Nations forces struggled to hold onto the Pusan perimeter in the late summer of 1950, the U.S. 1st Provisional Marine Brigade was rushed into action to reinforce U.S. Army and Republic of Korea (ROK) troops defending that precarious pocket in the southeast corner of South Korea. The undermanned 5th U.S. Marine Regiment and its support units had barely arrived at Pusan when they were moved in borrowed Army trucks to stop a North Korean assault near Chindong-ni, on the perimeter's western edge. Brigade commander Brigadier General Edward A. Craig knew little about the terrain his Marines would have to cross, so he climbed into a Sikorsky HO3S-1 helicopter and lifted off to scout the route, give directions to the lead battalion, pick a spot for his command post and meet with his Army superiors. Returning from the meeting with Lieutenant General Walton H. Walker, the Eighth Army commander, Craig stopped three more times to confer with his unit commanders. That crucial trip aboard a chopper from Marine Observation Squadron 6 (VMO-6) on August 3, 1950, was a harbinger of the increasingly vital role rotary wing aircraft would play in three years of tough fighting in Korea.

"Fortunately, Marine helicopters attached to VMO-6 were always available for observation, communication and control," Craig recalled. "These aircraft made my day. Without them I do not believe we would have had the success we did." The VMO-6 choppers soon were pressed into service to deliver water and other critically needed supplies to grunts struggling over hilly terrain. And they often carried out wounded Marines on return flights.

While the Marines were inaugurating the use of the underpowered Sikorsky helicopters in command-and-control, light resupply and medical evacuation roles, the Navy was flying those same choppers from aircraft carriers and a few large warships operating in the Sea of Japan. The Navy helicopters were used at first to pluck downed fliers from the sea and undertake short logistical missions between ships. But they quickly took on added duties such as gunfire spotting for the warships. Later in the conflict they became key elements in the prolonged effort to clear coastal waters of mines. 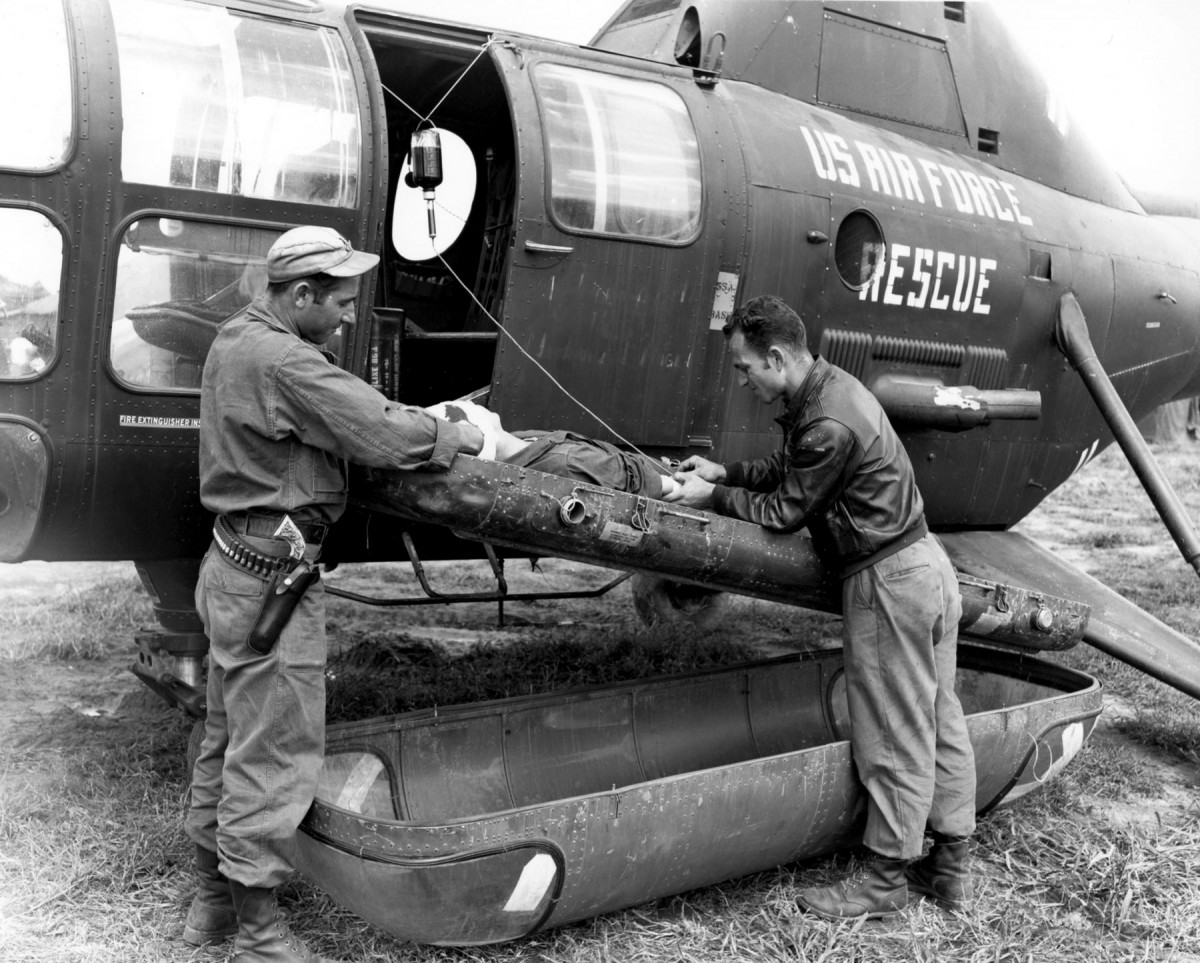 Early in 1951, Army helicopters also began to fly medevac missions, sparing seriously wounded soldiers punishing ambulance trips over Korea's wretched roads. Between their rescues of downed airmen and isolated ground troops and flying ambulance missions, U.S. helicopters were credited with saving tens of thousands of lives during the war. "Few technical innovations were equal in importance to the growing use of the helicopter for medical evacuations," one Army history declared. With the arrival of larger, more capable helicopters later in the conflict, the Marines and Army would demonstrate the usefulness of vertical lift aircraft in the tactical movement of troops and supplies — a role that would become the hallmark of another Asian war a decade later.

Korea was not actually the first time rotary wing aircraft had been used in combat. The Marines had tested — and rejected as unsuitable — the Pitcairn OP-1 autogyro, a hybrid aircraft with a four-blade rotor, for liaison and medevac missions in 1932, while fighting guerrillas in Nicaragua. The Army bought its first helicopter, a Vought-Sikorsky XR-4, on January 10, 1941, and operated a few improved models of that aircraft in Europe and Asia during the later stages of World War II. The first recorded use of a U.S. helicopter in combat came in May 1944, when an Army chopper rescued four downed airmen behind enemy lines in Burma. 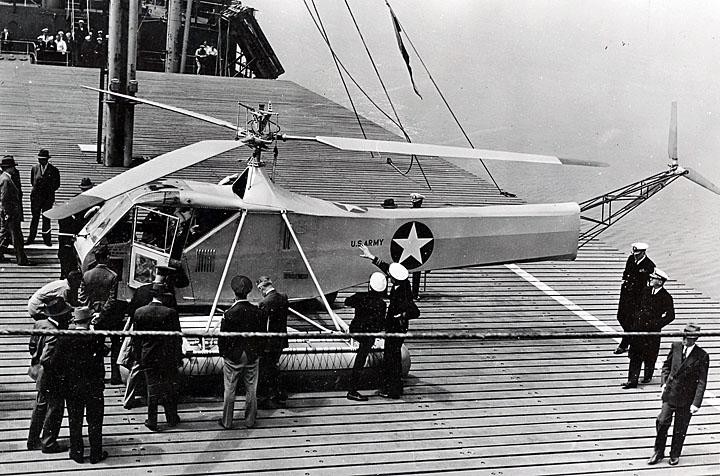 The Navy bought four of the improved Sikorsky aircraft in 1942 for evaluation but soon handed the responsibility for helicopter development and pilot training to the Coast Guard. The Navy resumed its own helicopter programs after WWII ended, forming Experimental Squadron 3 (VX-3) on December 28, 1945. Pilots and support personnel from that unit staffed Helicopter Utility squadrons HU-1 and HU-2 as training and fleet support squadrons.

Postwar atomic bomb tests forced the Marines to reconsider their traditional form of amphibious landings. As a result, Marine Helicopter Developmental Squadron 1 (HMX-1) was created on December 1, 1947, to test the use of rotary wing aircraft to move troops from ship to shore. When North Korean forces invaded South Korea on June 25, 1950, four HO3S-1 helicopters and 37 Marines were transferred from HMX-1 to VMO-6, which departed for Korea in July aboard the escort carrier Badoeng Strait.

The squadron's four helicopters and eight Stinson OY-1 (the U.S. Navy designation for the L-5) fixed-wing spotter planes flew into the Pusan perimeter on August 2, as the Provisional Brigade's ground troops were arriving. The helicopters quickly proved their worth, helping General Craig and his battalion commanders overcome their lack of familiarity with their operating area. "Helicopters were a life saver in this connection, as they provided the means for even commanders of small units to get into the air quickly from almost any point and identify roads, villages and key points prior to moving their troops," Craig recalled.

The helicopters added pilot rescue to their duties on August 3 when an HO3S carrying Craig diverted to pick up a Marine Vought F4U-4 Corsair pilot who had been shot down during a close air support mission. Marine choppers would assume that role scores of times in the coming months. Major Robert J. Keller, a commander of VMF-214, the famous "Black Sheep" fighter squadron, said later, "The helicopters have done a wonderful service in rescuing downed pilots under the very guns of the enemy."

As the choppers' roles diversified, their crews implemented a variety of field modifications. When asked to carry casualties to the rear, the Marines found that a stretcher would not fit inside the HO3S's small cabin. So they removed the rear window on one side and stuffed the wounded man's litter in headfirst, leaving his feet exposed to the weather. On occasion, innovative helicopter crews also supported the infantry by laying field telephone wires between units, putting down lines over rugged terrain within minutes that would have taken men on foot days to cross. 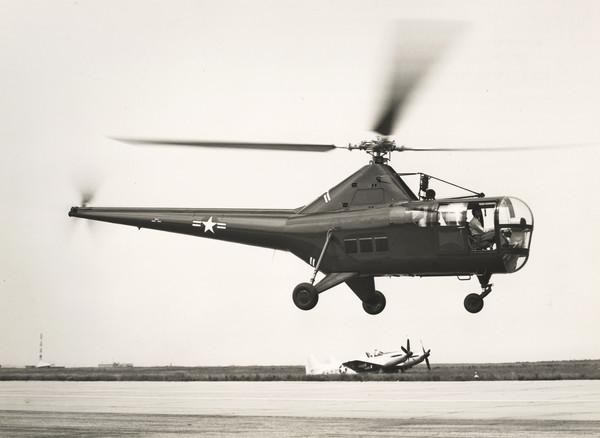 Equipped with only the most basic instruments, the helicopters were not actually certified for night flying. But with so many lives at stake, Marines soon found themselves evacuating casualties after sundown. Pilots from the other services also defied the ban on night flying. In the end, chopper crews would conduct hundreds of dangerous nighttime medevac missions.

To meet the increasing demands for their services, additional Marine helicopters and pilots were sent from Japan in August. General Craig called for larger helicopters that could carry heavier loads, and Marine headquarters responded within a year. VMO-6 helicopters had no immediate role in the 1st Marine Division's daring amphibious landing at Inchon on September 15, but choppers got into the action the next day when one of the squadron's helos flying off an LST (landing ship, tank) rescued a Corsair pilot who had ditched in the harbor. Many of the rescue missions proved dangerous, and VMO-6's helicopter units suffered their own losses. Two choppers were shot down, and one pilot was killed while trying to rescue other fliers during the advance from Inchon to Seoul.

The choppers played key roles during the Marines' advance to the Chosin Reservoir and their fighting withdrawal from the massive Chinese offensive, maintaining contact among the widely separated units. And they also continued flying medi­cal supplies and critical materiel in and carrying casualties out of small landing spots in the narrow valleys of North Korea. Two more choppers were shot up and another pilot killed during that precarious withdrawal. 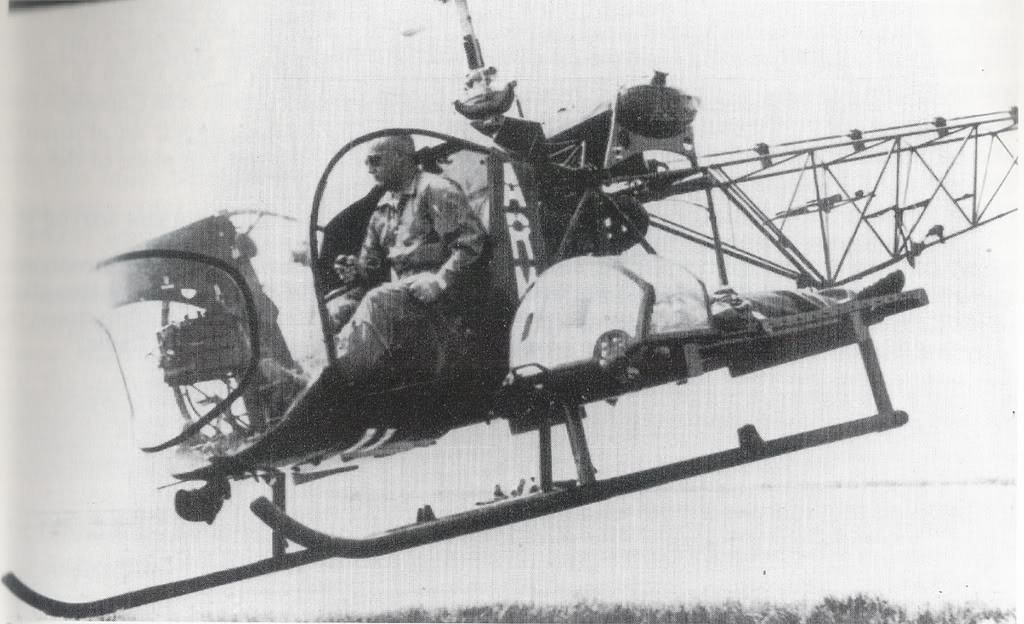 Late in 1950, as the numbers of HO3Ss were shrinking due to losses, VMO-6 started transitioning to Bell HTL-4s, the helicopters made famous by the M*A*S*H TV show's opening scene. The Bells could carry two casualties in litters strapped on each side, twice the load that could be carried by HO3Ss.

Helicopters of the Third Air Rescue Group were given credit for picking up 846 pilots and aircrew from behind enemy lines during the conflict. Add to that 8,373 soldiers and airmen lifted from battlefields and air taxied to the frontline MASH and thats quite a feat.

Although the first extensive use of helicopters in combat was handicapped by the limited capabilities of the early aircraft and the need to develop procedures under wartime pressure, they were widely hailed as tools that would be vital in future conflicts. On the basis of his experiences in Korea, Eighth Army commander Lt. Gen. Maxwell Taylor said: "The cargo helicopter, employed in mass, can extend the tactical mobility of the Army far beyond its normal capability. I hope that the United States Army will make ample provisions for the full exploitation of the helicopter in the future." 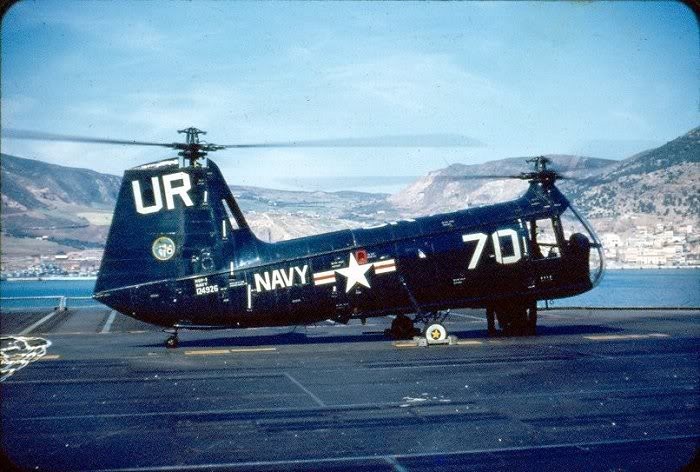 By the time the United States went to war again in Vietnam, a decade later, helicopters had made the transition from useful novelty to a symbol of the American way of fighting.