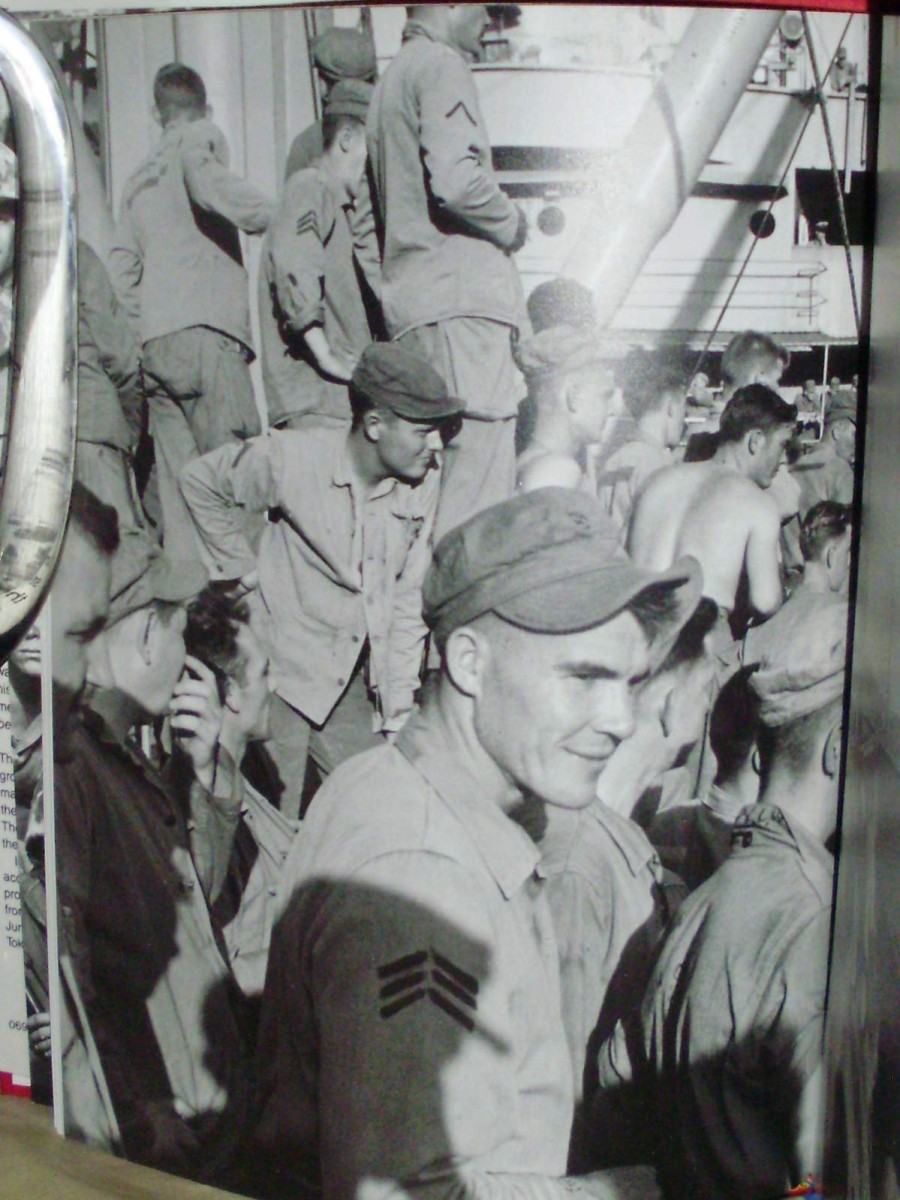 The 1930's fatigue uniform of the US Army consisted of blue denim pants, shirt and 'Daisy Mae' - a floppy brimmed hat nicknamed after a character in the popular hillbilly cartoon strip 'L'il Abner'. In 1938 this was changed to medium weight sage green cotton cloth woven in a herringbone twill (HBT) pattern. The blue denim remained the fatigue issue until 1941 however. The green of the original HBTs was found to fade quickly in use to an unsuitably light shade. In the Pacific this problem was sometimes remedied by vat-dyeing them en masse to a darker, even blackish colour. In 1943 the HBT manufacture colour was changed to the darker green OD7 shade.

Most GI's felt that the HBTs were hot and rather slow to dry, but generally pretty good. In North Africa and Europe HBT's were commonly worn as combat clothing alone and over brown woollen uniform for extra protection , camouflage and warmth. One 32nd Division Pacific veteran summed up the question of uniforms with the pithy and convincing comment, 'I don't believe there is any clothing or equipment adequate for jungle fighting'.

The HBT shirts all featured flapped breast pockets and exposed blackened steel '13 star' (or sometimes plain plastic) buttons. The M1942, the first of four patterns, had a two button waistband with buttoning cuffs and rear 'take up' straps; the pleated breast pockets had clip cornered flaps. The more common M1943 HBT shirt had larger breast pockets but lost the buttoning cuffs and two button waistband; it was made in a darker green than the first pattern,. The first version of the M1943 shirt had unpleated pockets, while the next had a pinched sort of pleat. The rarely seen last pattern HBT shirt (M1945) was made with smaller pockets with clipped bottom corners and squared flaps. At the end of the war a new thinner cotton poplin fabric was just beginning to be issued.

Rank was rarely displayed on fatigues, though NCO stripes were sometimes inked onto HBT sleeves. According to Capt Edmund G Love, a 27th Division historian, this formation at one time had a coded unit and rank symbols stencilled on the rear of the HBT combat uniform in black - a system copied from the US Marines. The division was identified by an outline parallelogram, enclosing unit symbols - eg a T, a 'bar sinister' and a Irish harp shape for the 105th, 106th and 165th Infantry Regiments respectively. Left of this, numbers indicated some ranks (8 for sergeant, 15 for captain) and right of it company letters were stencilled. Given the actual conditions of combat and the frequency with which HBTs had to be replaced, it is doubtful this complex system was maintained for long. Even in the six Marine divisions, which in 1943-45 seem to have had a throughly worked out system of back stencils, it is comparatively rare to see them in combat photographs. 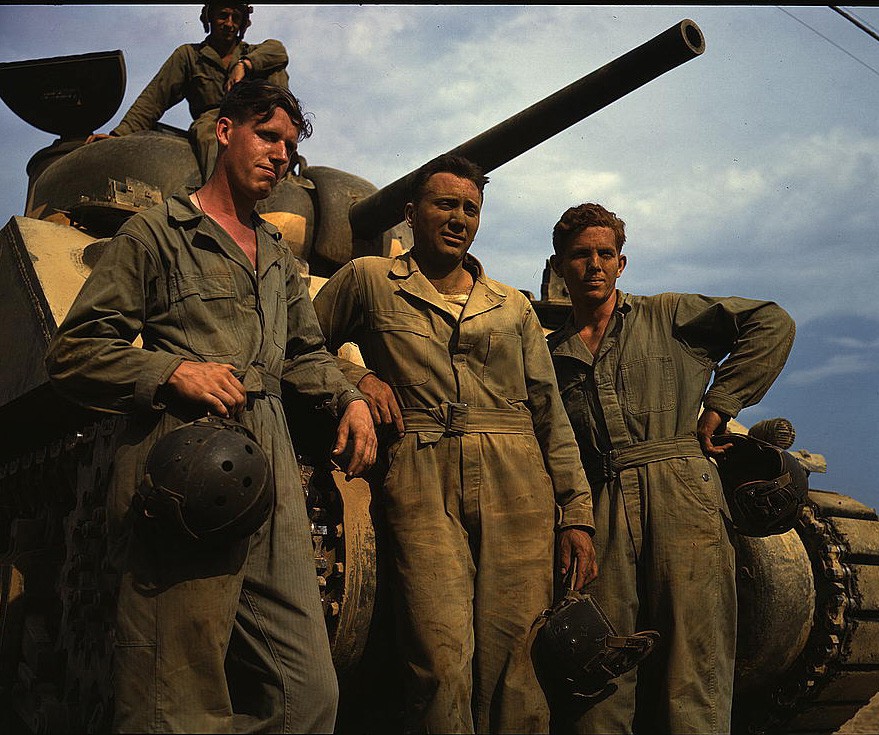 An HBT one piece jumpsuit work uniform had been designed in 1938 based on the B1 Air Corps Mechanics coveralls. In 1941, the M1938 was produced in HBT and featured a full buttoning front, an integral belt and a bi swing gusseted back; it had two breast pockets and rear and sideseam pockets. It was intended to be worn loose over other clothing, and the sideseam pockets opened to allow the wearer to reach inside. It was commonly worn by tank crewmen and mechanics but sometimes by other front line troops. It could be cumbersome to take off and proved incomfortably hot. A 1943 version was simplified and made in the darker OD colour.

Both HBTs and issue wool shirts commonly featured an extra length of material inside the buttoned closure, intended to be folded across to protect the skin against chemical agents; this 'gas flap' was sometimes cut out by the user. Trouser flys were also made with an extra interior flap of material for the same reason. In the Normandy landings of 1944 chemically impregnated HBTs and woollens were worn by landing troops as a precaution against chemical warfare. 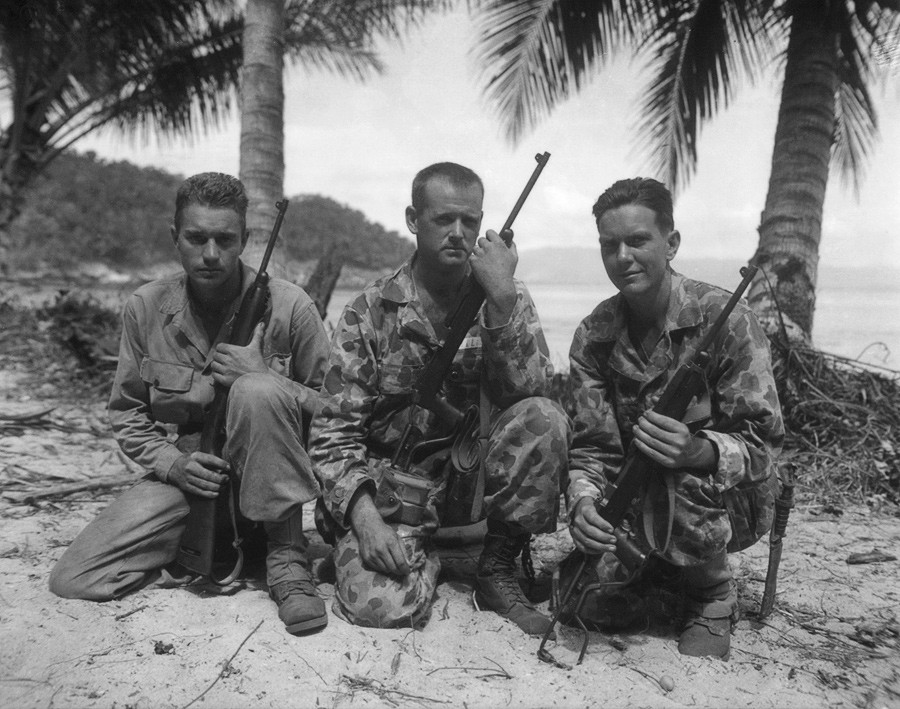 HBT fabric was also used for the first widespread use of camouflage by American military forces in 1942. Prior to this point, the US Army Corps of Engineers had been applying themselves to developing camouflage for military applications as early as 1940. Nevertheless, the process of its introduction into the US supply system was rushed, brought about by an urgent request General D. MacArthur in July of 1942 for production of 150,000 jungle camouflage uniforms for use in the Pacific Theatre. The pattern chosen was actually designed by civilian Norvell Gillespie (horticulturist and garden editor of Sunset, Better House and Gardens, and the San Francisco Chronicle). The green dapple or spot design, reversing to a tan/brown variation, began distribution to US military forces beginning in August of that year. Nicknamed 'frogskin' by many GIs, the pattern consists of a five colour green dominant 'jungle' camouflage pattern printed on one side, with a three colour brown dominant “beach” pattern printed on the opposite side. Produced in a variety of uniform styles as well as some articles of field equipment, the pattern was most widely utilised and made famous by the US Marine Corps in the Pacific Theatre.

'Frogskin' fatigues were also issued to a limited number of Army units in the European Theatre of Operations, most notably the 2nd Armored Division. The Germans already had a highly evolved set of different camouflage uniforms which resulted in some confusion and friendly fire incidents in the ETO. The frogskin camouflage garments were withdrawn from use in the ETO because of these incidents. Consequently, the production of frogskin uniforms and field gear was limited.

The first style of frogskin combat camouflage uniform was issued as a one-piece jungle jumpsuit. It had built in suspenders to help keep the suit up under load. It is rare to find these specimens with the suspenders intact as many were cut off in the field as they were felt to be a nuisance and very warm. The one-piece jungle jumpsuit fell rapidly out of favour by Marines as it was way too hot to wear in the Pacific and made evacuating bodily functions a major operation, leaving the Marine quite vulnerable.

Note that step number one in authenticating frogskin camouflage is the presence of Herringbone Twill in the Army pattern, not in the USMC pattern. The USMC pattern of Herringbone Twill is HBT in a true chevron pattern. The material repeats rows of chevrons. This type of HBT was used on the green USMC utilities from WWII. The Army pattern of which all frogskin uniforms were made has a non-slanting row interfering alternately with the chevrons.

R & D went back to the drawing board following the failure of the one piece suit and then issued the P42 combat shirt and pants. The design was simple. The shirt and pants featured frogskin Herringbone Twill. The shirt had a front bottom right top opening pocket with brown button closure. The right chest featured a patch pocket with USMC Eagle Globe Anchor stamp and no button closure. It had midline snap closures and was reversible frogskin with a green pattern opposite a beach brown pattern. The pants were also reversible and had domed snap pockets or metal buttons. The pocket configuration was front right slash and rear left patch. Once broken in, the camo uniform wore like a comfortable pair of pajamas.

Because P42s were used in all the legendary campaigns such as Tarawa, Bougainville, Peleliu and New Guinea among others, they are the most sought after of the basic frogskin uniforms. The P42s are associated with all the early victorious battles that were publicised in the newsreels.

Late in the war, P44 combat shirts and pants were issued. They were quite different than the P42s. P44 shirts had large buttoned vertical slash pockets just to the side of the midline button closures. The trousers had large three or four button side snap flaps. One pocket connected to the other pocket in the seat of the trouser, creating a pouch in which garments like a poncho could be carried. Drawstrings on the ankle cuffs were found in the 1st pattern P44s. Because these P44s arrived late in the war, it is much more common to find mint unissued specimens than the P42s. Frogskin camouflage is representative of some of the most celebrated battles in US history. Consequently, artifacts are heavily sought after and command high prices.