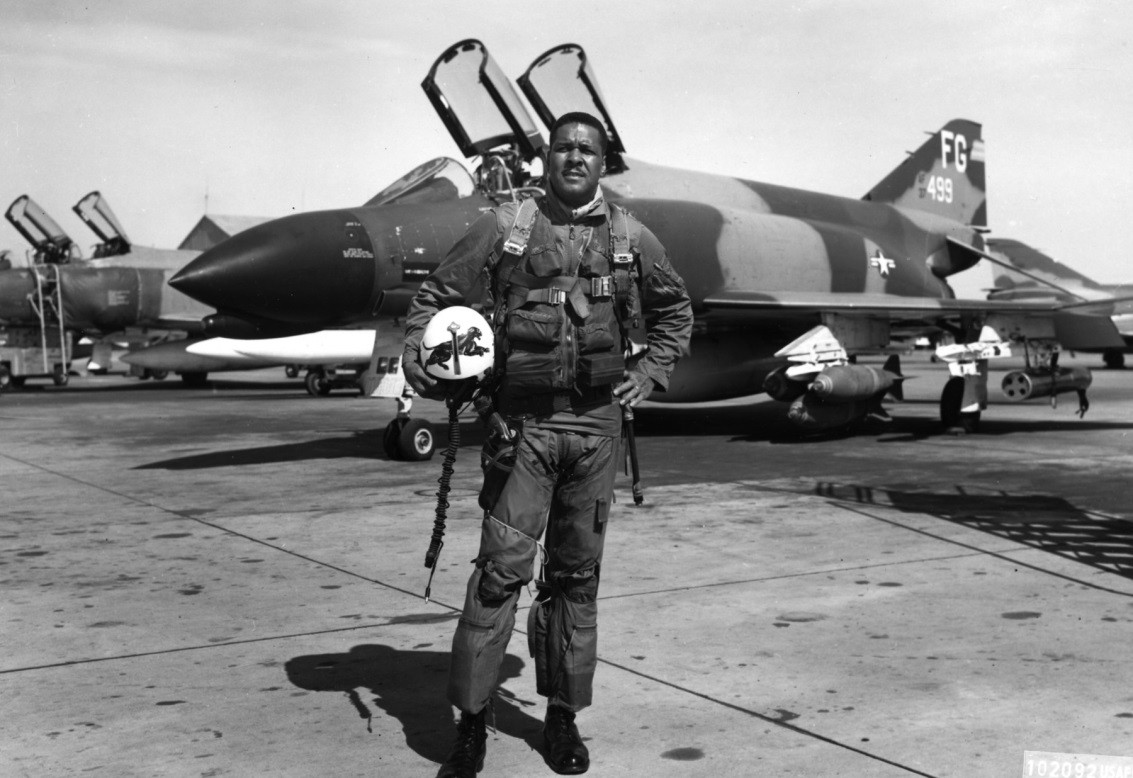 "Olds Lead, this is Ford. Four SAMS coming up at your 6 o'clock. Don't break, they're not guiding. I'm right behind you Chief. I'm covering your tail!" Vice-Commander of the 8th Tactical Fighter Wing, Col. Daniel James, called this out over the radio as his group of fighter aircraft entered the engagement unfolding in the skies over North Vietnam. At the time, James was leading the 'Ford Flight' of F-4's from the 8th TFW flying cover for the 'Olds Flight,' led by wing commander Col. Robin Olds, during Operation BOLO. Occurring on January 2, 1967, Operation BOLO was the largest single aerial fighter battle of the Vietnam War. During the battle, which lasted only 12 minutes, the 8 TFW destroyed seven North Vietnamese MiG-21's along with another two probable kills, all without the loss of a single aircraft. James' 'Ford Flight' entered the battle just as the lead flight began to engage with the enemy MiG-21's. While keeping an eye on the 'Olds Fight', James' group spotted two MiG's approaching from the front as another MiG snuck in behind the group targeting James' F-4 from the rear. James executed a horizontal barrel roll managing to reverse positions and get in behind his attacker. James launched and an AIM-9 missile that the MiG barely evaded, however, during the attempt to avoid James' salvo, the MiG's maneuver placed it in front of James' wingman who downed the aircraft with a missile strike of his own.

Daniel 'Chappie' James Jr. was born February 11, 1920, at Pensacola, Florida. He grew up in Pensacola and attended Booker T. Washington High School graduating in 1937. Later that year, James began studies at the Tuskegee Institute located at Tuskegee, Alabama. James earned a Bachelor's Degree in Physical Education in 1942, at the same time completing a government sponsored civilian pilot training program. James remained at Tuskegee as a civilian instructor pilot in the Army Air Corps Aviation Cadet Program until January 1943 when he entered the program as a cadet. James earned his pilots wings with the military and commission as a Second Lieutenant the following July. When James and his classmates graduated from Tuskegee they anxiously awaited their first assignments passing the time conducting familiarisation flights with P-39 Aircobra and P-40 Warhawk fighter planes at Tuskegee. He was particularly fond of the P-39. Standing at 6'4" and weighing more than 200 pounds, James was too big to fit in the cockpit of the P-39 while wearing a parachute. Not to be dissuaded, he went against regulation and flew the plane without a parachute carefully hiding that fact from the Army Air Corps. Inevitably one day after landing a P-39 following a training flight, James' secret was discovered, as despite flying without the bulky parachute he literally became stuck in the cockpit. No amount of twisting or turning was able to free him, and eventually he had to be cut out of the aircraft using a pair of metal sheers. 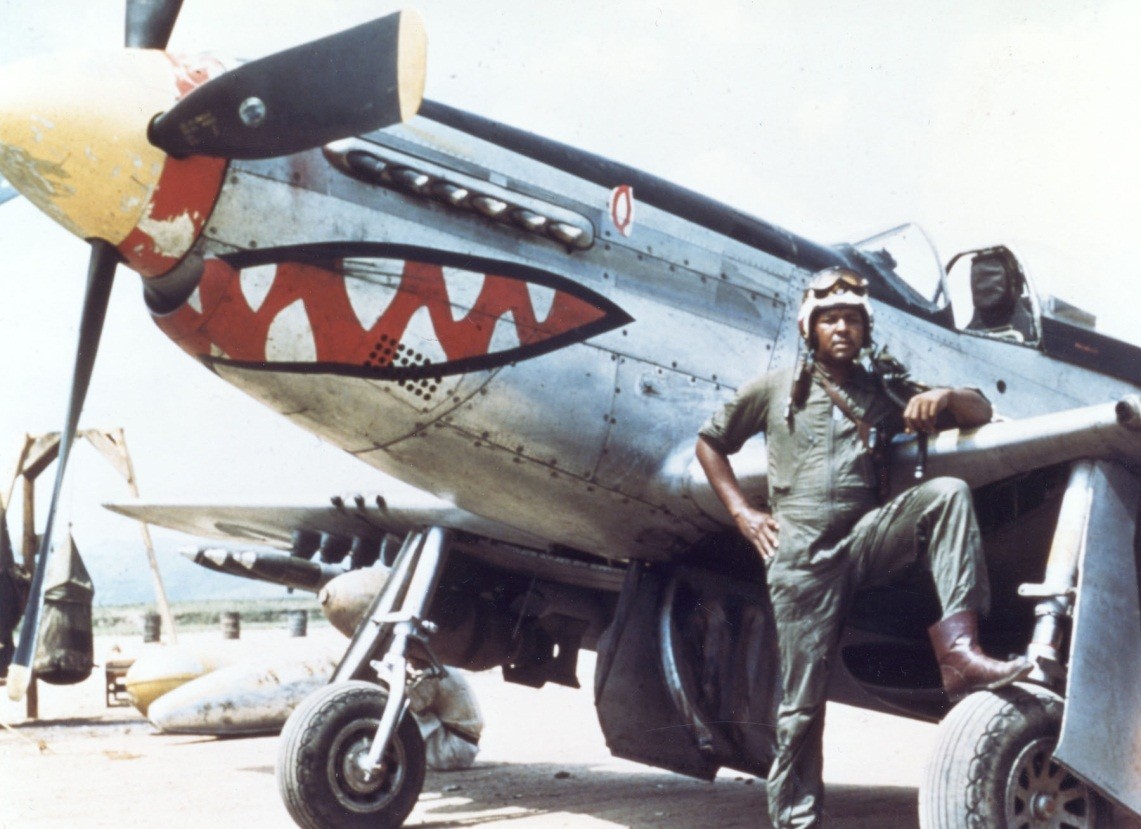 James' first assignment after Tuskegee was with the 332nd Fighter Group at Selfridge Field, Michigan. With a lingering desire to continue to fly the P-39, James was forced to transition to the P-40 and its larger cockpit after a direct order from his commanding officer to "Get out of that thing!" James remained within the continental United States for the duration of World War II serving at several different airfields across the country as an instructor training other pilots. His primary role supporting the war effort was to prepare other pilots for combat. James first saw combat during the Korean War after arriving in Korea in August 1950. Serving with the 18th Fighter Wing and flying the P-51 Mustang and later the F-80 Shooting Star, he flew a total of 101 combat missions over Korea. With the 18 FW, James flew operations from airfields at Taegu, Pyongyang, Suwon, Chinhae, Pusan, and also from air fields in Japan. While in Korea, James also served for a 30-day period with front line troops as a forward air controller, calling in air strikes to support ground forces operations. He was proud of his time with the ground forces, often boasting: "Got about three jeeps shot out from under me. Mostly by mortar fire. They could stick a mortar shell in your back pocket."

His luck in the air would also take a turn for the worse a few weeks after returning to the cockpit during a close support ground attack mission against North Korean gun emplacements. James' F-80 was hit by anti-aircraft fire, and he was forced to bail out of the stricken aircraft at 7,000 feet. James' parachute landed behind enemy lines, but luckily he was picked up by a roving Marine Corps tank unit and immediately returned to friendly lines. James was back at his air base before nightfall, and he climbed into another F-80 flying an additional mission the same day he was shot down. James remained in Korea until December 1950. Between the Korean War and Vietnam War, James served in a variety of staff and command positions in the United States and also during a three-year tour in England. James joined the 8 TFW in Thailand as deputy commander of operations in December 1966, assuming the role of vice-commander in June 1967. Known for his organisational skill, James was the perfect complement to the wing commander, Col. Robin Olds, who was known more for his operational aptitude. Both men were known for their strong work ethic, and they became the best of friends while working together in Thailand. They were well respected by the men of the 8 TFW for their propensity to not only work hard, but also to play hard during those brief times when mission requirements relaxed. James was well known for his singing voice, often displaying his talents singing fighter pilot songs for audiences at the base club. 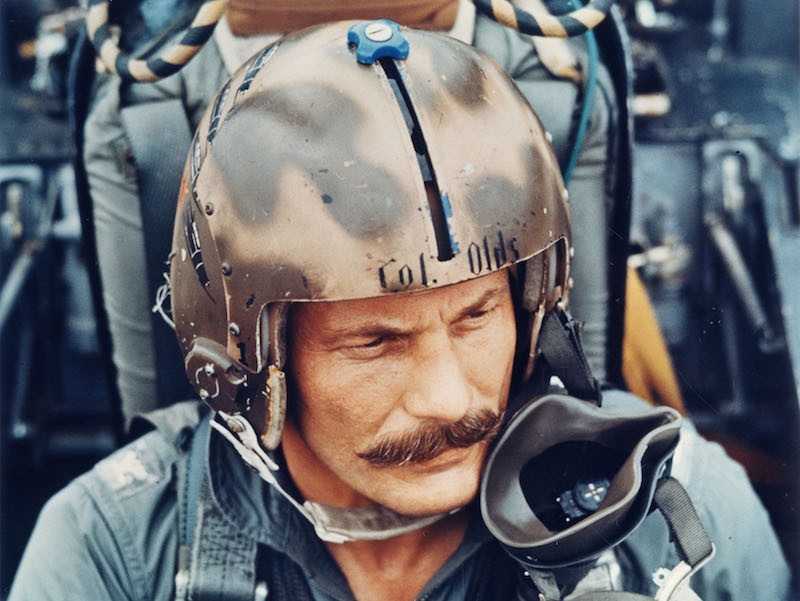 During his time with the 8 TFW, James flew a total of 78 combat missions. During one mission flying the infamous Route Package IV, a flight route that fighter pilots dubbed "Downtown" due to it being the most heavily defended area of North Vietnam and included the communist capital city of Hanoi, James brought his F-4 back with 56 holes in the fuselage. After the conclusion of Operation BOLO, the 8 TFW adopted the nick-name, "Wolf Pack," and its commander was given the nick-name "Wolf," a tradition the 8th Fighter Wing continues today. As vice-commander during Operation BOLO, James effectively became the 8 FW's first "Wolf 2." Following his stint with the 8 TFW, James served as vice-commander of the 33rd TFW at Eglin AFB, Florida, until October 1969 when he assumed command of the 7272nd Training Wing at Wheelus Air Base in Libya. Shortly before James took command at Wheelus, a group of Libyan military officers perpetrated a coup d'état and ousted the existing government. Wheelus Air Field had been established by the United States following World War II. Initially, the U.S. government insisted that the new Libyan government honour existing agreements despite their protests, and several confrontations ensued as a result. During one such confrontation, a group of Libyan halftracks refused to halt for guards at the base gate and entered the installation. James arrived on scene and stood face to face with the new Libyan leader Colonel Muammar Gaddafi. Gaddafi stood in front of James with his hand resting on his holstered .45 attempting to stare him down. James barked at Gaddafi, "Move your hand away from that gun!" and Gaddafi relented. James later commented: "I told him to move his hand away. If he had pulled that gun he would have never cleared his holster!" After this incident, the Libyans never again attempted to enter Wheelus without permission. Determining that the strategic importance of Wheelus Air Field had waned, the U.S. willingly withdrew from the installation in June 1970 and James returned to the United States. 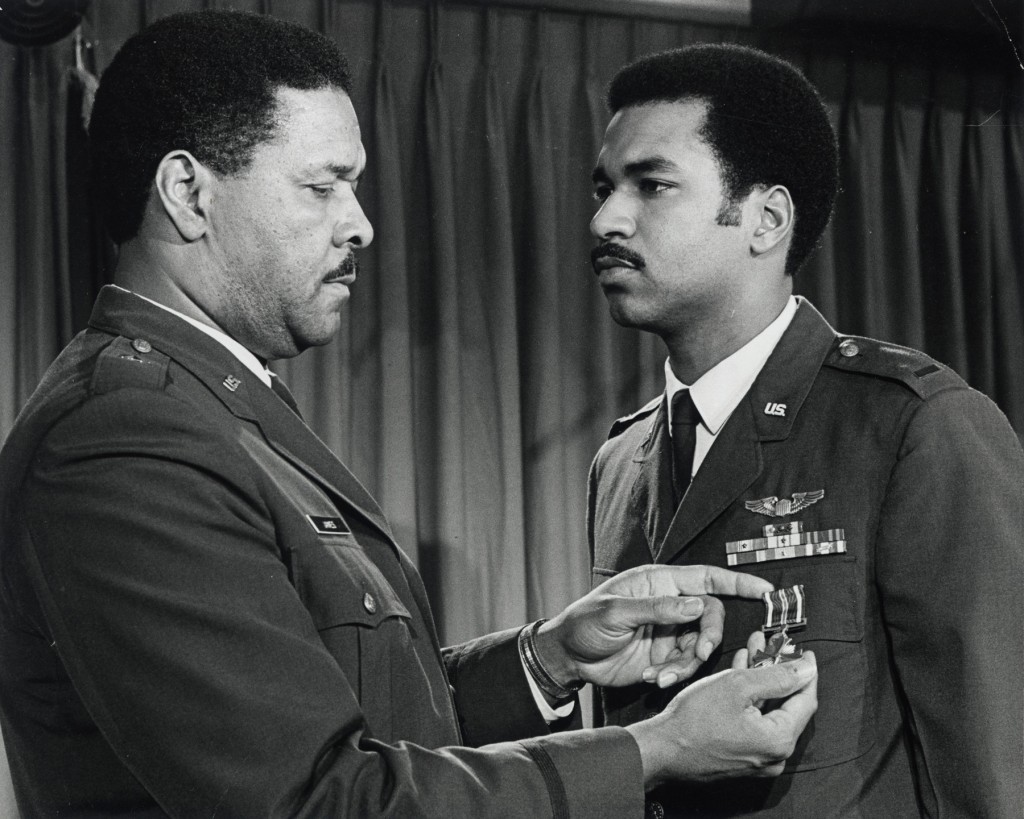 James received promotion to brigadier general in July 1970, serving in a variety of staff positions over the next 4 years. On September 1, 1975, James pinned on his fourth star becoming the first African-American to achieve the rank of full general in United States military history. James assumed command of NORAD and Aerospace Defense Command at Peterson AFB, Colorado, having responsibility for operational command of all U.S. and Canadian strategic aerospace defence forces. James' last position with the Air Force was as Special Assistant to the Air Force Chief of Staff at the Pentagon. He retired from the Air Force on Feb. 1, 1978. With a military career that spanned 35 years and three wars, James flew 189 combat missions during the Korean Vietnam wars combined. James rose from the rank of second lieutenant to full general earning the Distinguished Flying Cross with two Oak Leaf Clusters, the Distinguished Service Medal with Oak Leaf Custer, and the Legion of Merit with Oak Leaf Cluster, among a variety of other military decorations. James was also awarded the George Washington Freedom Foundation Medal in 1967 and 1968. His citation for the 1970 Arnold Air Society Eugene M. Zucker Award for outstanding contributions to Air Force professionalism read: "...fighter pilot with a magnificent record, public speaker, and eloquent spokesman for the American Dream we so rarely achieve."

On February 25, 1978, just 3 weeks after retiring from the Air Force, Gen. Daniel 'Chappie' James Jr. passed away at the age of 58 years old as a result of a heart attack. His remains were interred at Arlington National Cemetery. James' son, Daniel James III, also served in the Air Force and Air National Guard rising to the rank of lieutenant general and becoming the first African-American to take command as director of the Air National Guard before retiring in 2006.