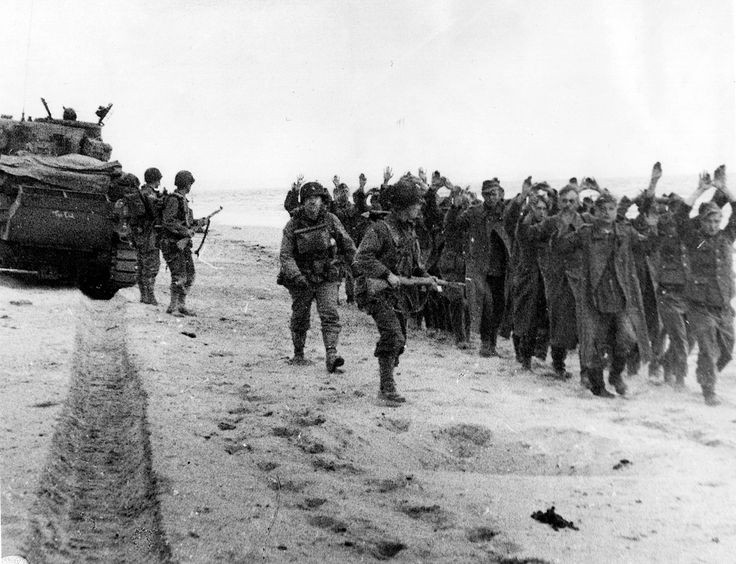 On this day 72 years ago the D-Day operations had been ongoing for 24 hours. When remembering the Allied actions of Operation Overlord, much of the focus is of course directed toward the initial invasion and beach assault itself on 6th June, however many days of heavy combat were to follow with ongoing strategic actions and firefights all over Normandy, some of which would become deciding factors of the war.

On Utah Beach most of the actions on D plus 1 were aimed at the destruction of scattered enemy groups which still held positions within the perimeter of the beachhead. There was no front line at the end of D Day, the airborne operations had pocketed sizeable enemy forces which had to be eliminated before communications and supply lines could be secured. This was the task accomplished on 7 June. By the end of that day the VII Corps beachhead had taken more definite shape.

The dawn of D plus 1 confronted the US Army 82d Airborne Division with the unsolved problems of the day before. The La Fiere bridge and Ste. Mere-Eglise remained the critical areas in the western sector. Until 0900 the division continued to be out of touch with higher headquarters. D Day had left all of the division units hard-pressed, and General Ridgway's primary concern was in the arrival of expected tank and infantry reinforcements. At the close of the day he had reported his position, his losses in men and materiel, and his need for artillery, antitank guns, ammunition, and medical supplies. He had stated that he was prepared to continue his mission when reinforcements came. But the communication was one-way and General Ridgway did not even know whether his messages got through. 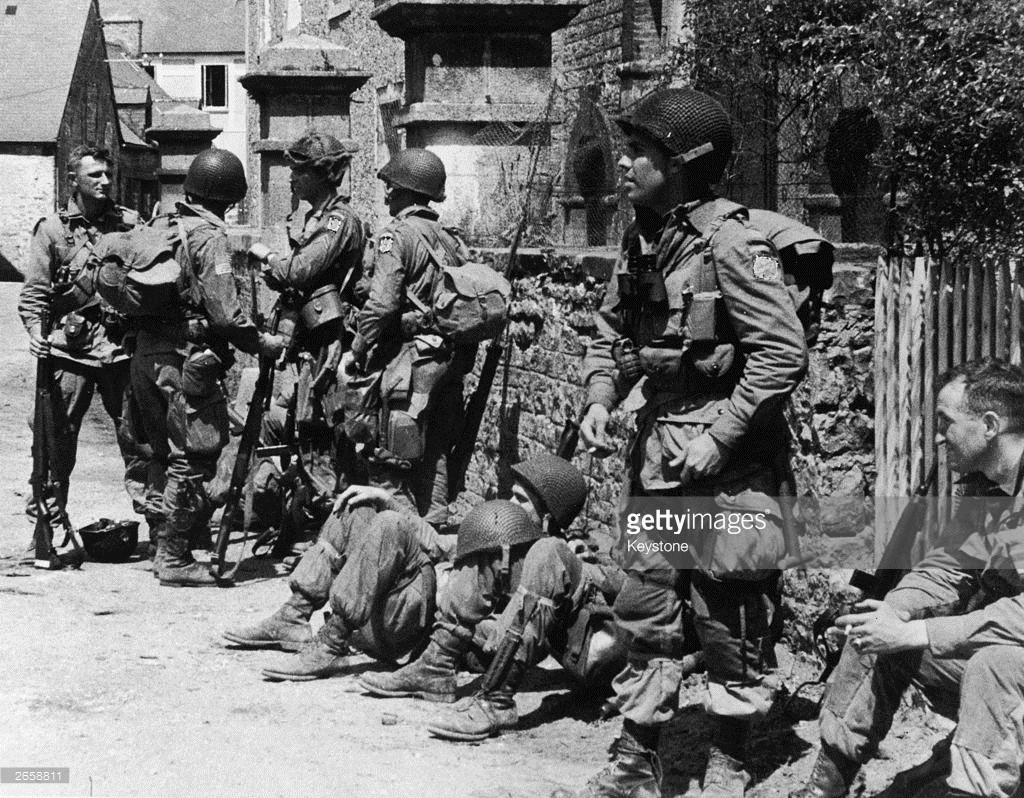 More fruitful was a D-Day contact by patrol with the 4th Division. Late in the evening Lt. Col. W. F. Winton, assistant G-3, took a patrol northeast in the direction of Beuzeville-au-Plain. He contacted elements of the 12th Infantry and went on south to the division command post at Audouville-la-Hubert. At midnight he talked to General Barton, from whom he obtained for the first time information on the 4th Division. At 0800 the next morning he returned to his own command post with assurance of relief by the 8th Infantry and Colonel Raff's force, the advance elements of the seaborne Howell Force which had tried to break through to the 82d Division the night before.

Between the 82d Airborne Division's main body at Ste. Mere-Eglise and the 8th Infantry at Les Forges the enemy still had a large force, holding the ridge between Fauville and Turqueville and blocking the highway south of Ste. Mere-Eglise. Another enemy force was threatening the 82d Division from the north. The elimination of these enemy forces became the main preoccupation of both the 8th Infantry and the 505th Parachute Infantry on D plus 1. 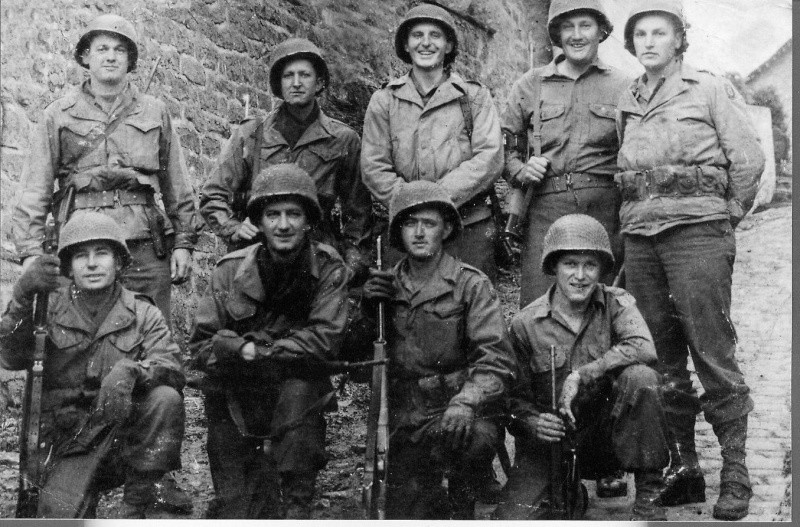 The 8th Infantry attacked the Turqueville salient on the morning of 7 June, with the objective of establishing contact with the 82d Airborne Division at Ste. Mere-Eglise. The 1st Battalion's attack on Turqueville itself was the first to get under way late in the morning, and succeeded in eliminating the eastern tip of the enemy salient. Turqueville was held by a battalion of Georgians (79th), which initially put up a stiff fight but was finally talked into surrender. During the morning the 4th Division G-l, Lt. Col. Gorlan A. Bryant, Sgt. John Svonchek, and a driver had left the division command post intending to visit the 22d Infantry. They had made a wrong turn at Audouville and had driven west, into the enemy position near Ecoqueneauville, where they were taken prisoner. They were moved to a house south of Turqueville and held there along with twenty-three American parachutists. When it was learned that the enemy unit was Georgian, Sergeant Svonchek, who spoke Russian, persuaded some of them to surrender, and about seventy-five gave up. Then the German captain gave the cease fire order and surrendered at about the same time that the 1st Battalion, 8th Infantry, was closing in on Turqueville. Upon entering the town the battalion rounded up 174 prisoners.

Meanwhile, the 2nd and 3rd Battalions of the 8th Infantry had attacked northward from their positions in the Les Forges area to link up with the 82d Airborne Division at Ste. Mere-Eglise. The 3rd Battalion advanced astride the highway while the 2nd Battalion attacked toward Ecoqueneauville. As the two battalions reached a creek bed in front of the enemy lines, they received heavy machine-gun and artillery fire from enemy positions along the ridge Fauville-Ecoqueneauville. The 3rd Battalion was held up and had one of the severest fights of these first few days, but as the 2nd Battalion took Ecoqueneauville both battalions continued their advance toward Ste. Mere-Eglise. South of the town, enemy interdiction of the road caused the 2nd Battalion to circle to the east and make an approach to the town from the northeast. But almost immediately after it had established contact with the 505th Parachute Infantry within the town, it was engaged by the enemy north of Ste. Mere-Eglise. The main German position was to the west of the highway. Colonel MacNeely (2nd Battalion, 8th Infantry) and Colonel Vandervoort (2d Battalion, 505th Parachute Infantry) planned a coordinated attack. The 2nd Battalion of the 505th moved up astride the road and attacked, supported by tanks, while the 2nd Battalion, 8th Infantry, crossed the road behind the 505th Parachute Infantry and attacked on its left. By the end of the day the two battalions had killed or captured 300 Germans and cleared the enemy from his positions to the west of the highway.

Earlier in the afternoon an enemy armoured thrust from the north had been beaten back on the very edge of Ste. Mere-Eglise by an American tank force. This force had been dispatched by order of the Corps commander himself, who learned of the 82d Division's request for assistance upon his arrival at the Corps command post late in the morning after he had come ashore. At the 4th Division's command post, across the road, General Collins met one of General Ridgway's staff officers, who outlined General Ridgway's situation and repeated the 82d Division commander's desire for tanks to meet a threatened armoured attack. General Barton still had tanks of the 746th Tank Battalion in reserve at Reuville, and General Collins ordered these to be sent to General Ridgway under the officer's guidance.

On reaching Ste. Mere-Eglise the tank column turned north. After moving a few hundred yards it received heavy artillery and mortar fire from an enemy armoured column, consisting of five tanks and a few other vehicles, about 300 or 400 yards away. Lt. Houston Payne, in the leading American tank, shot at the first enemy tank, setting it afire, and then knocked out an antitank gun on the side of the road. As both American and enemy tanks were in column only the lead tanks had targets. Lieutenant Payne destroyed one more enemy tank before his ammunition was exhausted and then moved back to permit the second tank to come forward. 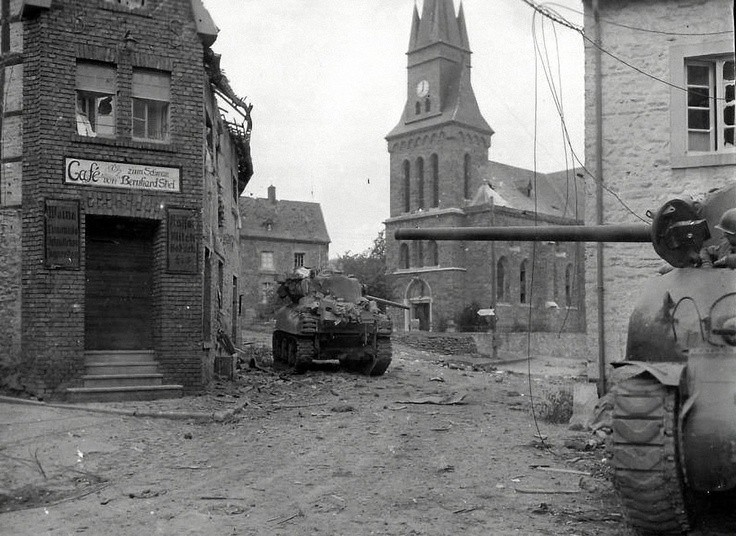 Seeking a way of attacking the flank of the enemy column, Lt. Col. C. G. Hupfer, the 746th Tank Battalion commander, had in the meantime reconnoitred to the east and north and found, to the right of the highway, a trail which led straight north about a mile and joined a secondary road which entered Neuville-au-Plain. Some of the American tanks drove north on this trail and entered Neuville-au-Plain. At a cost of 2 of their own they destroyed 2 enemy tanks, took 60 prisoners, freed 19 American parachutists, and forced the German armoured column to retreat northward. They stayed in Neuville-au-Plain until 2100 when they withdrew for lack of infantry support.

It is not clear whether the German armour which had supported the infantry attack along the highway had come from Neuville-au-Plain, but the two actions do not appear to have been coordinated. Whatever the enemy's intentions, Lieutenant Payne's engagement with the German armour and Colonel MacNeely's and Colonel Vandervoort's later attack west of the highway removed the enemy threat to the town and allowed the 82d Division units in Ste. Mere-Eglise to give more attention to developments along the Merderet. 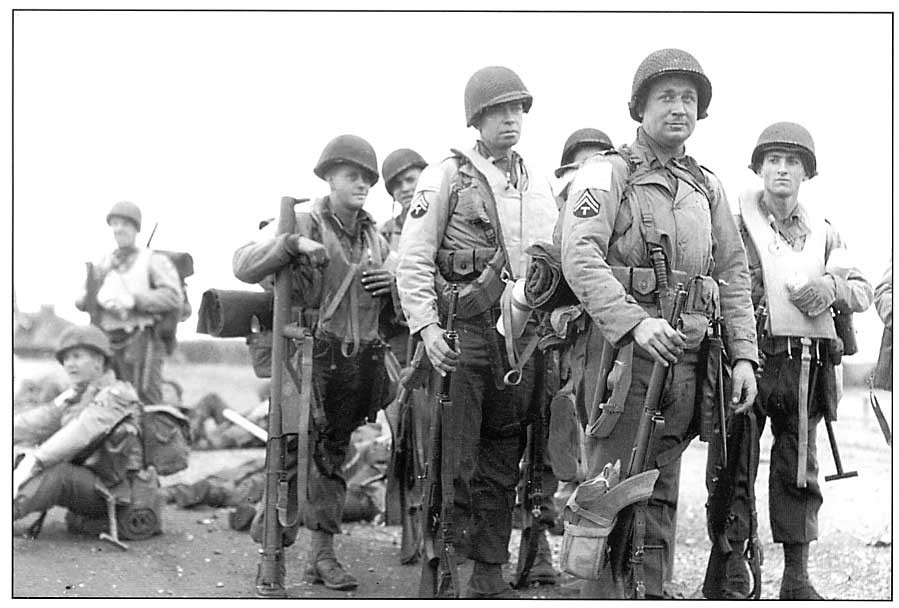 The 325th Glider Infantry had arrived in two serials, one at 0700 and one at 0900. Although the landings were somewhat scattered, most of them were made in the Les Forges area. One serial received ground fire from enemy positions to the north and there was a total of 160 landing casualties. But the regiment was given some protection by the attacks of the 8th Infantry and it made a rapid assembly near the Les Forges crossroads.

The 325th Glider Infantry had the mission of proceeding to Chef-du-Pont as division reserve. But when Col. Harry L. Lewis (commanding officer) contacted division headquarters by radio at about 1000, he was instructed to use at least part of his force to eliminate the enemy force in the Carquebut area, where the Germans were threatening the security of the Chef-du-Pont bridge and causeway. The 1st Battalion, 505th Parachute Infantry, had been unable to divert forces to counter this threat. At the same time Colonel Raff received orders to bring his seaborne force up to Chef-du-Pont and then to the 82d Airborne Division command post. While Colonel Raff carried out his orders, arriving at the division command post at noon, Colonel Lewis took his 3rd Battalion to the Carquebut area and sent the other two to Chef-du-Pont. He found Carquebut evacuated by the enemy and proceeded to rejoin the other two battalions. The 1st Battalion was then sent, under General Gavin's order, to La Fiere, and the 2nd Battalion to Ste. Mere-Eglise, where it was to be attached to the 505th Parachute Infantry for operation in the north on the 8th Infantry's left.

Meanwhile, the action at La Fiere bridge had been a continued stalemate. Enemy counterattacks were repulsed and the American position was slightly strengthened by reorganisation. But no progress had been made in establishing a bridgehead on the west bank. In the evening the 1st Battalion of the 505th, which during the day had fought of the enemy with heavy losses at La Fiere, was released to Regiment for the next day's operation. The 82d Airborne Division forces west of the Merderet remained isolated. In general, the situation of the 82d at the end of D plus 1 had been solidified, particularly around Ste. Mere-Eglise, although its D-Day mission was still unaccomplished.