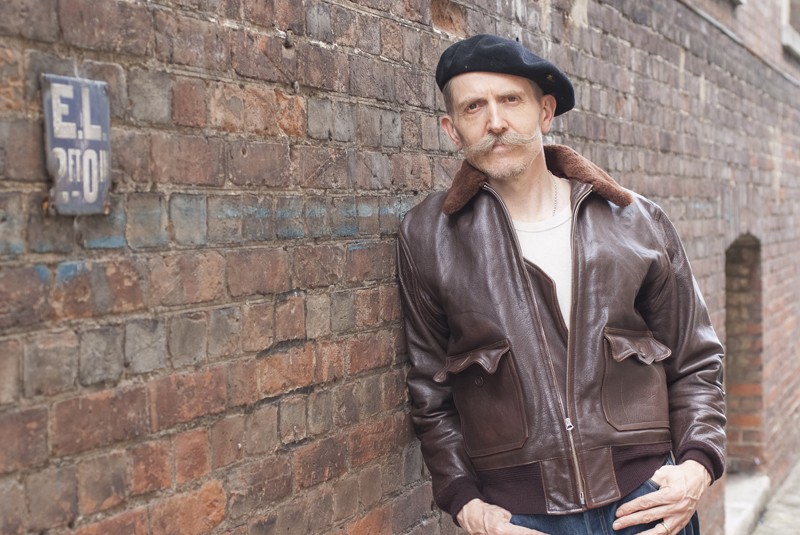 For some time now William Hamper has been a regular Eastman and Buzz Rickson's customer. His working pseudonym for the past 38 years has been Billy Childish - one of the few remaining bastions of British originality and talent today. A cult figure in America, Europe and Japan, he is by far the most prolific painter, poet, and song-writer of his generation. In a twenty year period he has published over 40 collections of critically acclaimed poetry, recorded over 100 full-length independent LP’s and produced over 2000 paintings.

Born in 1959 in Chatham, Kent, he left Secondary education at 16 an undiagnosed dyslexic. Refused an interview at the local art school he entered the Naval Dockyard at Chatham as an apprentice stonemason. During the following six months he produced some six hundred drawings. On the basis of this work he was accepted into St Martin’s School of Art to study painting. However, his acceptance was short-lived and before completing the course he was expelled for his outspokenness and unorthodox working methods. With no qualifications and no job prospects Childish then spent some 12 years developing his own highly personal writing style and producing his art independently.

Since then he has had solo and group exhibitions internationally including New York, London, Seoul and Berlin. He was included in British Art Show 5, which toured throughout four cities - Edinburgh, Southampton, Cardiff, and Birmingham. In 2010, he was the subject of major concurrent survey exhibitions at the ICA in London and White Columns in New York, and in 2011 he became Artist in Residence at the Chatham Historic Dockyard where he currently works. 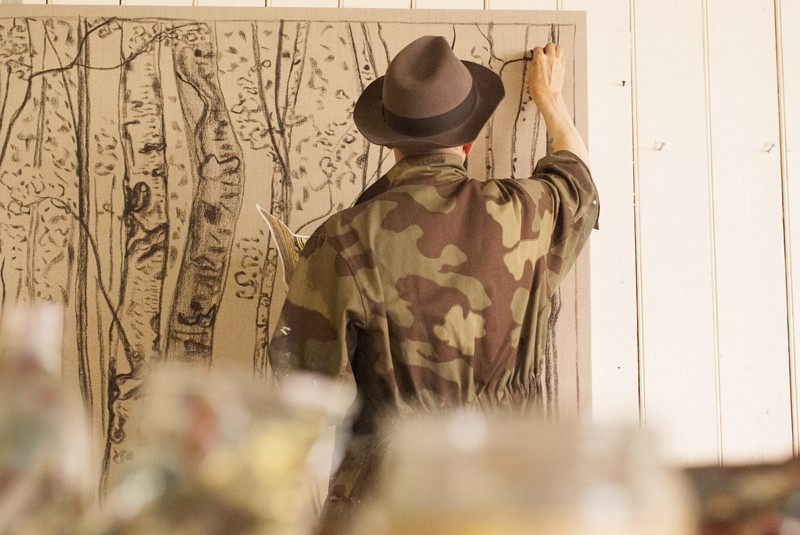 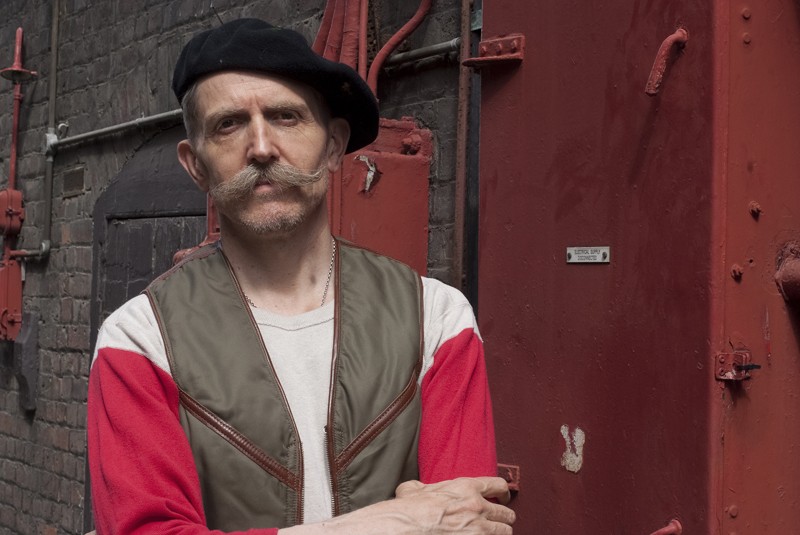 As fan's of Billy's work across all genres it was a pleasure to speak to him recently regarding his work and patronage of eastman products.

To define you as eclectic in your influences and projects would be a huge understatement, in your view does creativity have to be approached in a wide variety of media?

No, I just happen to get bored if I do anything every day. As a kid I wanted to be painter as I didn’t fancy a ‘real’ job. Music came along in 77 and I was happy to be included. But we were never with an agency or big label – our tours were 2 weeks tops in the back of a transit round Germany etc. Writing, again, I just write when I feel like it, but within that I am very disciplined and can apply myself with quite an intense focus - but then I need a break and to do something else. This suits me but isn't a 'have to' for everyone else.

Would you define one particular facet of your work as more important to you than the others?

You've been an Eastman and Buzz Rickson's customer for some time now, what initially attracted you to the brands?

I found out about Eastman from a friend who recommended I take a look. As a boy I used to buy old military jackets and hats and wore some of that stuff as a punk in 77. As a teenager through to the 90’s I bought most my cloths in Oxfam, as I hated regular fashion. I then began to notice people who made stuff with the same attention to detail as the old gear I liked. I found out about the Buzz Rickson from Eastman Leather. Really you vote with your money & patronage, and I vote for people who care about what they do, be it art, cooking, or any type of making. If your going to engage in materialism make it good materialism, not careless stuff often made by underpaid children in the 3rd world without piss breaks. Of course there can be compromise, but I really try to engage in life with love and prefer people who do the same. 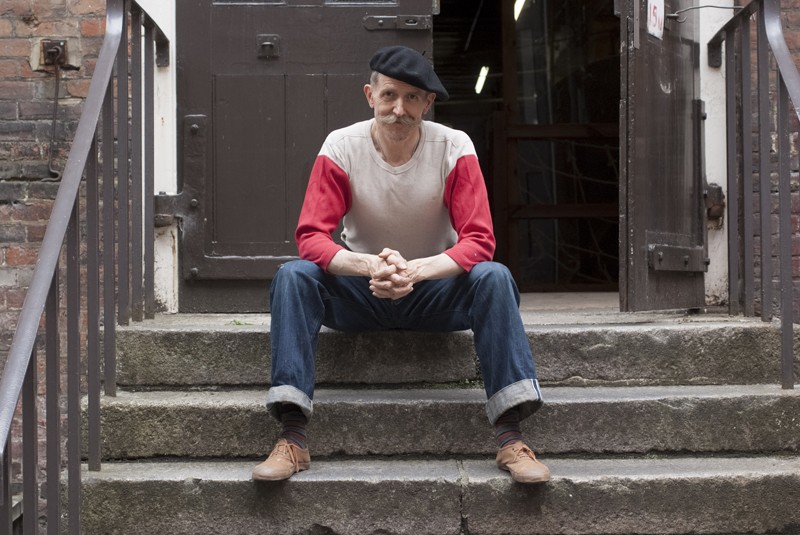 You have a strong sense of style that is clearly motivated by the context of the clothing you wear as much as the aesthetic, can you explain why this is important?

In a strange way it's not that important to me. I often don’t remember what I've put on in the morning - or look like - unless I'm confronted with myself in a shop window. All of my eclectic choices are based on liking the colours in the weave and weft, or a button. I've always been like this; when I was seven I used to wear an old fedora that I brought for 3d from a local jumble sale. I liked it because it was of the old world and coloured green.
I was one of the few punks to wear shorts (8th army) and sometimes an old homburg hat. To understand where I'm coming from I'd have to say I have a childlike relationship with stuff. There is no mandate other than some stuff fires my imagination and things that are real and cared about allow my imagination fuller reign.

Your style could almost be described as a reaction to the burgeoning subcultures during your formative years in the 1970's - glam, punk and so on. Is this a conscious move to relocate yourself in a different era?

I've covered this a bit, but for sure I liked all the old soldiers who worked in the dockyard when I was 16. I was an apprentice stone mason in the yard 1976 and it was normal to wear an old WWII beret and work duffel coats from back then. (my overalls were WW11 RAF,). I certainly felt more affinity with the old boys than my contemporaries.

You made a fantastic Super 8 film based on the British retreat from Mons in WWI, can you tell us more about the motivation behind this?

I was a RE cadet when I was 12 and have always liked a bit of serge. I've been a member of a living history group, The Great War Society for many years, and in 2004 we did an 80 mile march in full kit to mark the 90th anniversary of the retreat from Mons – also raising money for the British Legion (as a punk one of our venues in 1977 was the British Legion Hall in Chatham). For the march I decided to borrow my mates old super 8 camera he bought at the Rochester flea market and bought 10 reels of out-of-date Russian super 8 stock on the cheap. I was run ragged as I was also on road duty on my old bike, but I got some shots in and luckily it all came good. I recorded the soundtrack on an old cassette recorder and dubbed that on and we had a little story. 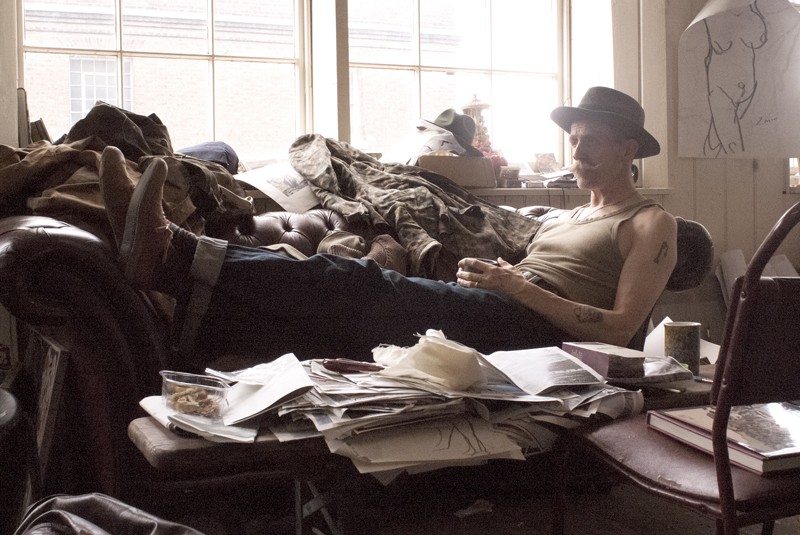 You seem to approach all of your creative projects in a specifically old fashioned manner, the phrase, 'if a jobs worth doing, its worth doing well' springs to mind, is this something you adhere to?

That’s nearly true. But I'm no stickler – I never had a lesson in anything and really found my own way copying mates (and the masters). I'm fast and a bit of a bodger – but I bodge with love and now have somehow learned to do some of this stuff with ease and grace. What I admire in others is their care and ability to measure (I couldn’t really manage to be a stone mason as I've got no maths. I'm dyslexic, left school at 16 was not allowed in the school choir as they said I was tone deaf, and I was thrown out of art school. So I'm a bit of a contradiction.

Can you tell us what you're working on at the moment?

I'm just finishing a new LP – we still record on analogue and have always made our releases on vinyl. I have a solo show of paintings opening in New York this September. I've made a hand coloured etching edition to tie in with this and as a fund raiser for the Whitchapel Gallery in London. There's a new bronze edition about to come out through L-13 (skull and femur) + some affordable prints of paintings. I've also been writing a novel about 77 /78 punk rock – 7 drafts and 4 years in now - and have numerous other side projects I'm messing with as well. 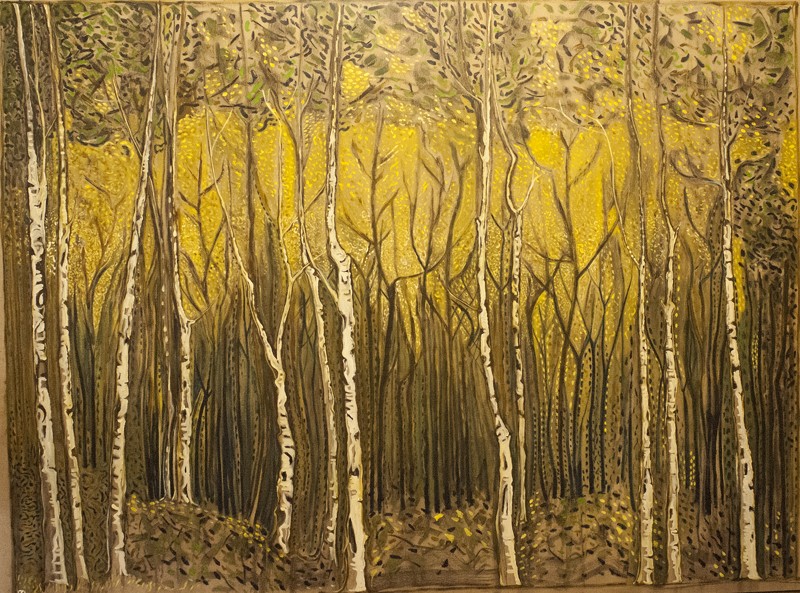 His latest collection of poetry titled 'In the Teeth of Deamons' was published this year by Tangerine Press, Tooting