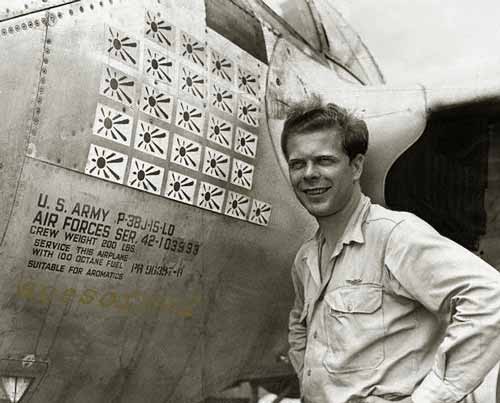 Richard Ira Bong was born on September 24, 1920, the son of a Swedish immigrant. He grew up on a farm near the small town of Poplar, Wisconsin and would go on to become America's "Ace of Aces" during World War II.

Dick did well in high school, helped on the farm, and pursued many interests as a teenager. He played on the school's baseball, basketball and hockey teams; played clarinet in the school band; sang in the church choir; and enjoyed fishing and hunting. He became a quite a good shot with a hunting rifle. Like many boys of his era, he became interested in aviation at a young age, and was an avid model builder.

He started at Superior State Teachers College in 1938, where he enrolled in the Civilian Pilot training program, also taking private flying lessons. In 1941, he enlisted in the Army Air Corps Aviation Cadet Program.

He received his primary flight training at Rankin Aeronautical Academy in California in June 1941, and completed Basic at at Gardner Field, California.  At Luke Field near Phoenix, Arizona, he received Advanced Training in single-engine (fighter) planes, where he learned to master the AT-6. One P-38 check pilot said Bong was the finest natural pilot he ever met. There was no way he could keep Bong from not getting on his tail, even though he was flying an AT-6, a very slow aeroplane. In January of 1942, just after Pearl Harbor, Bong earned his Army Air Corps commission and his coveted pilot's wings. He promptly became a "plow-back," staying on at Luke to teach gunnery. But after a few months he got the chance to train in Lockheed's big new fighter, the P-38. While mastering the twin-engine craft at Hamilton Field, San Francisco, he first attracted the attention of General George Kenney, his future mentor and head of the Fifth Air Force.

In a famous story, Bong was high-hatting all over San Francisco Bay, flying under the bridges, buzzing Market Street, and blowing washing off of clothes lines. One harried housewife complained. Kenney called Bong and told him,

"Monday morning you check this address out in Oakland and if the woman has any washing to be hung out on the line, you do it for her. Then you hang around being useful - mowing the lawn or something - and when the clothes are dry, take them off the line and bring them into the house. And don't drop any of them on the ground or you will have to wash them all over again. I want this woman to think we are good for something else besides annoying people. Now get out of here before I get mad and change my mind. That's all!" 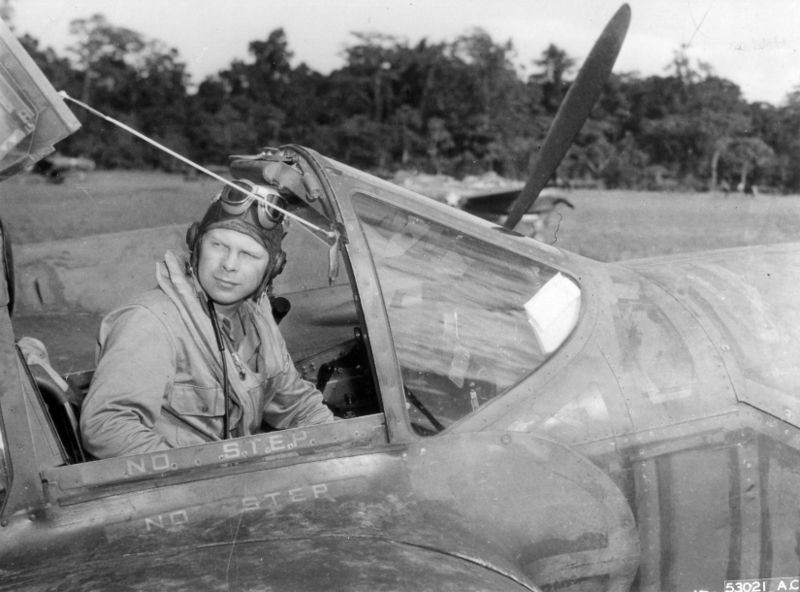 When General Kenney went to the Pacific in September, 1942, Bong was one of the pilots he tapped to join the 49th Fighter Group. 2nd Lieutenant Bong was assigned to the 9th Fighter Squadron, the "Flying Knights," and was sent to Australia to "hurry up and wait." While waiting for P-38s to be delivered, Bong flew with Captain Thomas Lynch, 39th FS of the 35th FG, operating out of Port Moresby, New Guinea. On December 27th 1942, while flying with the 35th, Bong scored his first aerial victories, a Zero and an Oscar, for this he earned a Silver Star.

After this Bong began shooting down Japanese planes at a rapid rate. While he never had any hugely successful single mission such as McGuire or Shubin, Bong's kills were evenly spread out throughout his time flying combat. Also, most of his victories were in the earlier stages of the war against very experienced Japanese pilots. Bong also was considered extremely lucky in finding the enemy. Some pilots hardly saw any enemy fighters in all their time flying combat.

General Kenney took him out of action again and promoted him to Major. When Rickenbacker heard about it, he sent a message of congratulations reading, "Just received the good news that you are the first one to break my record in World War I by bringing down 27 planes in combat, as well as your promotion, so justly deserved. I hasten to offer my sincere congratulations with the hope that you will double or triple this number. But in trying, use the same calculating techniques that has brought you results to date, for we will need your kind back home after this war is over. My promise of a case of Scotch still holds. So be on the lookout for it." General Kenney also sent Bong a case of champagne. Word that alcohol was being supplied to the famous, clean-cut, young pilot caused a mild uproar in certain circles. In response General Arnold dispatched two cases of Coca Cola with the message: "I understand you prefer this type of refreshment to others. You thoroughly deserve to have the kind you want. The Army Air Forces are proud of you and your splendid record. Congratulations!" When word of this reached other squadrons, those pilots let it be known that they would be glad to take Bong's "unwanted" booze off his hands.

Bong returned to the Southwest Pacific on September 10, reporting to Gen. Kenney at Hollandia. Bong's latest HQ assignment was 'advanced gunnery instructor,' and while allowed to go on combat missions, he had orders to only defend himself, and not seek out the enemy. 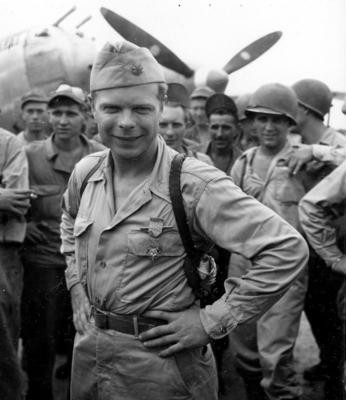 General MacArthur presented the Medal of Honor to Bong on the Tacloban airfield on December 12, 1944. He tossed away his written remarks and said, "Major Richard Ira Bong, who has ruled the air from New Guinea to the Philippines, I now induct you into the society of the bravest of the brave, the wearers of the Congressional Medal of Honor of the United States." Then he pinned the medal on Bong, they shook hands and saluted. 'For conspicuous gallantry and intrepidity in action above and beyond the call of duty in the Southwest Pacific area from 10 October to 15 November 1944. Though assigned to duty as gunnery instructor and neither required nor expected to perform combat duty, Maj. Bong voluntarily and at his own urgent request engaged in repeated combat missions, including unusually hazardous sorties over Balikpapan, Borneo, and in the Leyte area of the Philippines. His aggressiveness and daring resulted in his shooting down 8 enemy airplanes during this period.' 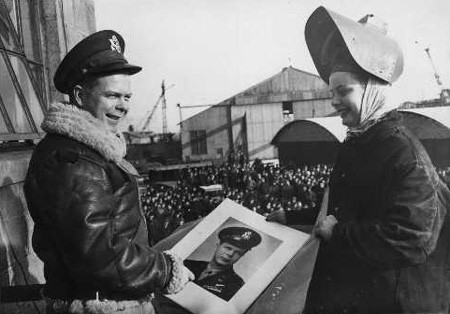 The following paragraph is quoted from the Dick Bong article at the National Aviation Hall of Fame:

Bong described combat flying as fun and a great game that made life interesting. Some pilots were only concerned with their scores, almost to the point of recklessness. Bong relished in the actual flying of combat, not how many enemy aircraft he could shoot down. Bong often referred to his gunnery skills as being lousy, perhaps the worst in the Army Air Force, and this was after breaking Eddie Rickenbacker's record of 26 kills! However, his skills were very adequate, and estimates were that he had a 91 percent hit rate. Bong also knew how to get the most from the aircraft he was flying. He loved flying the P-38, and many pilots who flew with him commented on his mastery of it. He was not a flashy pilot, and knew the limitations of the P-38 and never pushed it beyond. His analytical nature was valuable when flying combat, and he always analyzed the situation before going in with guns firing. Most importantly, he felt no shame in breaking off an engagement when the odds turned against him.

After Bong scored his 40th victory, General Kenney sent him home, this time for good. He was America's "Ace of Aces," with 40 aerial victories, 200 combat missions, and over 500 combat hours behind him. By New Year's Eve, 1945, America's number 1 ace was back in the "Z.I.," headed for Washington D.C. to meet the dignitaries, including General 'Hap' Arnold. At the Pentagon, he met Bob Johnson, also there on a PR tour. Dick explained that he had been dragged around the country on War Bond tours and hated it. "I've got this coming out my ears, Johnson. I'm sure glad to see you. You can help me bear up under this nonsense. It's worse than having a Zero on your tail."

After his PR trip, he returned to Wisconsin, and married Marge on February 10, 1945. After their California honeymoon, he went to work at Wright Field as a test pilot, helping to develop the Lockheed P-80 Shooting Star. He studied jet propulsion theory and boned up on the engineering details of the new plane for two months, before getting a chance to fly one. After being checked out in the P-80, he flew it eleven times that summer. 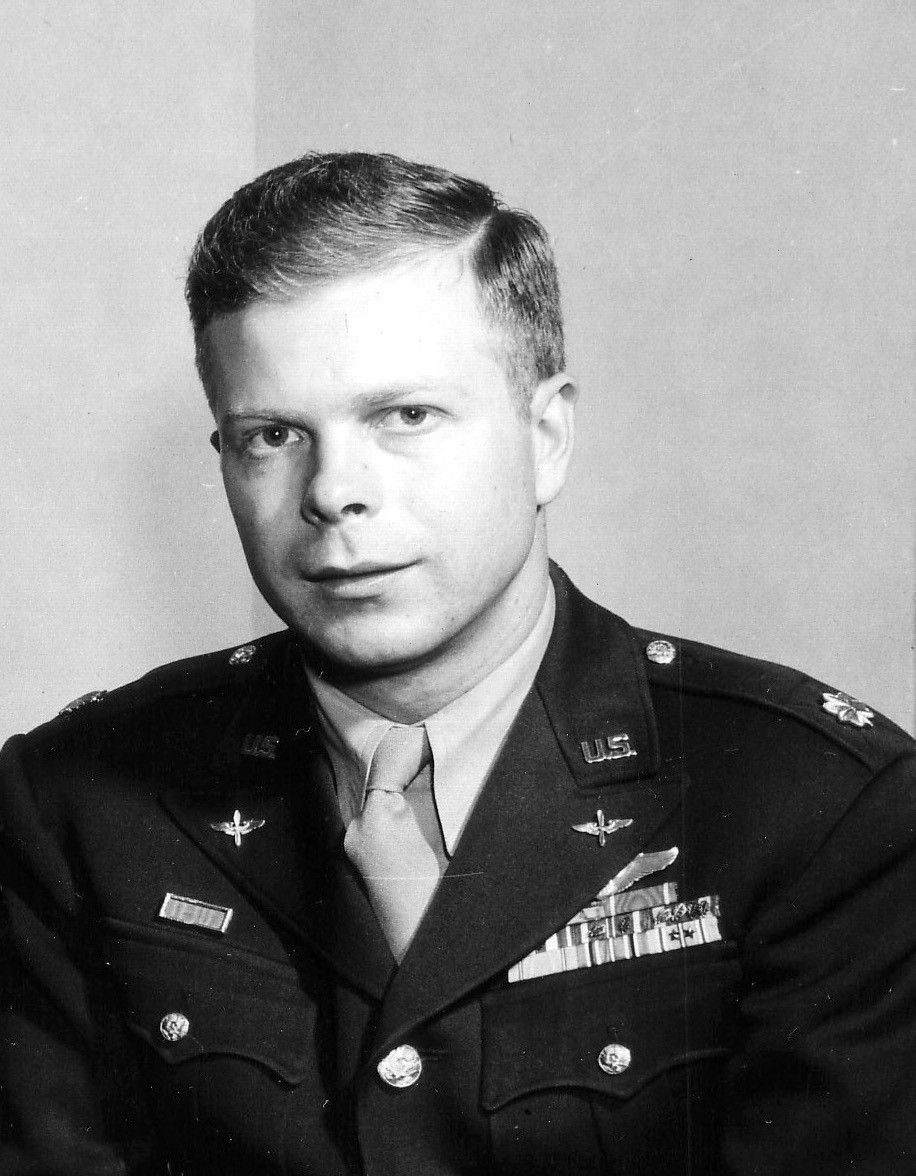 On August 6, 1945, while half a world away the Enola Gay dropped the bomb on Hiroshima, Bong stepped into an airplane for the last time. His P-80 malfunctioned just after take-off, and while he bailed out, he never had a chance. He was just too close to the ground. After surviving two years of combat flying, Richard Ira Bong met his end while on a routine acceptance flight.

Richard Bong's decorations included the Medal of Honor, the Distinguished Service Cross, the Silver Star (with 1 OLC), the Distinguished Flying Cross (with 6 OLC's), the Air Medal (with 14 OLC's), and many other American and foreign medals.

Major Bong was honored when the airport at Superior, Wisconsin, was named the Richard Bong Airport. In his hometown of Poplar, there is a Bong Memorial room in the Poplar High School that includes his uniform, all twenty-six of his decorations, photographs, newspaper clippings and even a fragment of the plane in which he was killed. Outside is mounted a P-38 Lightning fighter, similar to the one he flew to glory.